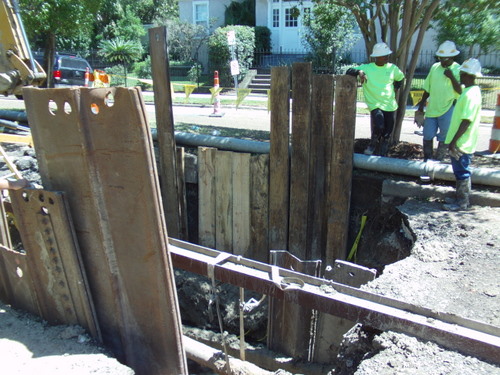 The sinkhole that opened underneath Broadway Street near Maple now consumes most of the riverbound side of the street there, and a difficult repair job to the broken sewer line underneath means the block will be closed off for at least the rest of the week, authorities said.

The hole — which opened up on Saturday as Tropical Storm Lee poured rain over Uptown New Orleans — is not growing, said Sewerage and Water Board spokesman Robert Jackson, but contractors have peeled the asphalt back to reveal the size of the hole. Workers at the site estimated it to be around 10 feet deep. 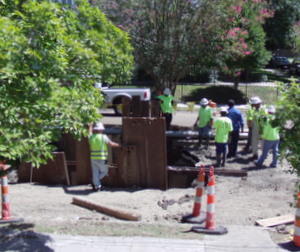 A wider view of the sinkhole. (Robert Morris, UptownMessenger.com)

“The hole is still the hole that’s there, but the opening is larger,” Jackson said.

The hole was caused by a broken 21-inch sewer main, but it lies underneath two water pipes, a 6-inch and a 12-inch main, Jackson said.

The work should take another three to five days, he estimated. Afterward, a temporary surface will be placed over the hole to reopen the road, and the asphalt will be replaced in the weeks that follow, Jackson said.

While the road is closed, both directions of traffic are being routed into Broadway’s lakebound lane.

For video of the sinkhole repairs, see our this report from our partners at WWL-TV.

One thought on “Sinkhole swallows section of river-bound Broadway Street”