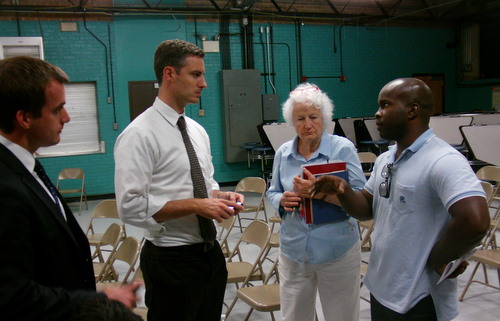 Stung by the pain of a broken promise, members of the James Weldon Johnson Elementary School community did their utmost Wednesday night to convince the new chief of the Recovery School District to resurrect a plan to move their campus to a safer, more prestigious site a few blocks away.

“The crime is very high here,” said Johnson principal Wanda Brooks. “This school year, we had a killing in the back by the cafeteria.” 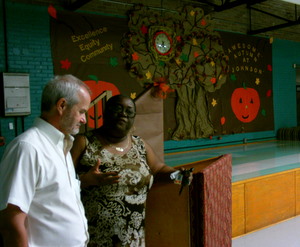 The original post-Katrina master plan for rebuilding New Orleans schools did not even include a mention of Priestley, recalled Jerry Speir, a Carrollton resident who has been helping Johnson in its efforts to apply for a charter. After public outcry, the plan was revised, and Priestley was included as a renovation project once money became available. After FEMA designated $2 billion to rebuild New Orleans schools last year, however, another plan was released — again with Johnson slated for renovations at its present site, and Priestley left out.

“There has been a drastic reshuffling of money, and now we’re not talking about that building anymore,” Speir said. “To me, $15 million into this building is not the best way to spend your money.”

“What’s frustrating to me is, this piece we’re doing now, we had gone through with RSD last year,” Brooks said. 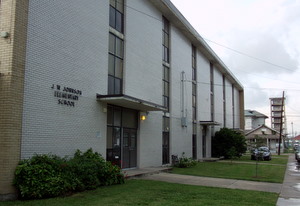 After opening the meeting by stating his intent merely to listen, Recovery School District superintendent John White offered neither promises nor rebuttals to the statements made by the speakers in the audience of more than 50 Johnson teachers, parents and neighbors. Over the next few weeks, district officials are finalizing the revised plan for the FEMA money, and the question of whether to renovate Johnson or move to a new school at Priestley is being studied, he said.

“We have two buildings in close proximity to one another,” White said. “We’re basically weighing the problem. Where can we serve the most students in the neighborhood at the most cost efficient way for the taxpayer?”

Part of the concern is that using the Priestley site will be far more expensive than renovating Johnson, because it is much older. It could be riddled with termites or asbestos, making even demolition more expensive, White said.

White was challenged on that point by Tilman Hardy, president of the Pensiontown Neighborhood Association. The school district should do the studies to determine the cost, so the conversation can be factual, rather than hypothetical, Hardy said.

White agreed, and asked Hardy what his preference would be if the costs come out roughly equal.

“If the community wants to see the Priestley site developed, that’s what the community should get,” Hardy said. “The community has a very emotional attachment to that site.” 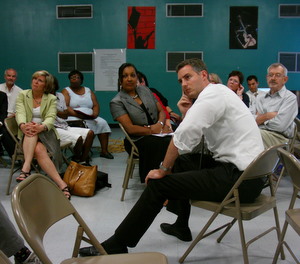 Under Brooks’ leadership since Hurricane Katrina, Johnson’s performance scores have increased from lows in the 20s — far beneath failing — to their present level of 67, rising for the first time this year out of “academically unacceptable” status. One of the school’s challenges, however, is losing the students they put on the right track to more desirable schools, because of the dangers both real and perceived around the Johnson campus, faculty members said. A more prestigious campus and location would make those gains easier to retain.

“Every year we lose students because of perception,” said first-grade teacher Yma Ferrouillet. “If we have the perception that this school is better, we won’t lose our good students.”

Though the facility discussion dominated the meeting, White said he had hoped to also talk about whether the school should remain run directly by the Recovery School District or become a charter. This year, colorful posters around Johnson rally students toward a school score of 77, but White said he really wants the community to begin thinking about the best path for Johnson to reach a high-performing score more like 120, now that it has shed its old designation of “failing.”

“Johnson has crossed that bar, and we should applaud that,” White said, “but it’s not high enough.”

To read our live coverage of Wednesday’s meeting, click “Replay” in the box below.