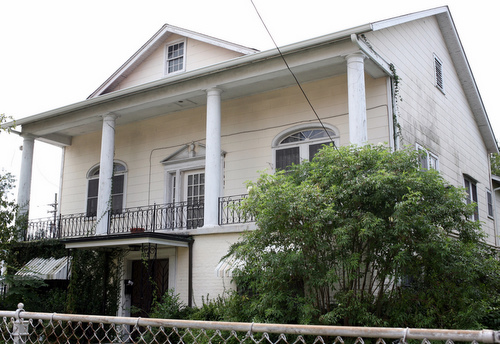 Is the century-old rectory at Uptown’s St. Henry’s Catholic Church slated to become a parking lot?

If so, it’s the fate that neighbors of the church are already organizing to fight off. Last week, nearby neighbor Faye Lieder got word from the Historic District Landmarks Commission that the church plans convert the church into a “multi-use facility” and to “request the demolition of a building across the street from the church that they no longer need,” Lieder said Sunday night at a meeting of neighbors who quickly convened at her house.

The Archdiocese of New Orleans could not be reached Monday for comment, but the residents said their understanding is that the church will be used for a temporary exhibit dedicated to the life of Pope John Paul II, and that the rectory — currently used by the Ecole Bilingue — will become parking to accomodate tour buses.

“It definitely should not be taken down, because that destroys the fabric of our neighborhood,” said Anne Farmer, another neighbor.

Chief among neighbors’ concerns was the use of a new parking lot after the exhibit leaves, such as being sold or leased to a business on Magazine Street.

“By removing that building right there, you’re going to turn the whole thing into a parking lot,” said John Pecarrere. “These buildings weren’t destroyed in the hurricane, and they want to demolish these buildings that have survived. … You’re going to change the whole composition of that neighborhood.”

An exhibit might find a more suitable space elsewhere, such as the Our Lady of Lourdes church on Napoleon near Freret, the neighborhood members suggested, given the area’s ample parking and more commercial nature.

“There’s a lot of tolerance in this neighborhood,” Farmer said, noting the neighborhood’s accomodation of massive crowds for two weeks every Mardi Gras. “But at the same time, we are not a dumping ground. If we let the archdiocese pave those lots, we’re looking at the commercial life coming to Constance.”

The neighbors drafted two petitions Sunday night, one opposing the demolition of the rectory and the other opposing the use of the church for the exhibit. They plan to circulate both and begin meeting with City Councilwoman Stacy Head’s office as well as with city preservationists to research the age of the building.

The demolition would be subject to a public hearing before the Neighborhood Conservation District Committee.

The Archdiocese of New Orleans also declined to discuss its plans to our reporting partners at WWL-TV:

10 thoughts on “Neighbors organize to stave off possible demolition of St. Henry’s rectory”