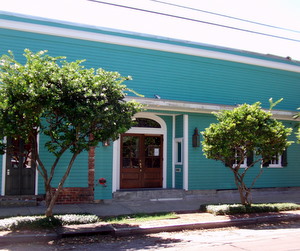 A request by the proposed Johnny V’s restaurant to be allowed to open in spite of unauthorized expansions divided the City Planning Commission on Tuesday, sending it to the City Council for a decision with no formal recommendation either way.

The commission had postponed its decision on Johnny V’s presentation last month, awaiting the outcome of negotiations over a contract to use the parking lot of nearby Perlis as a way of compensating for the added space in the restaurant. (The surrounding neighborhood association’s support for the project is contingent on that contract as well.) Stephen Kroll, a member of the planning commission staff, told the commission Tuesday that “no formal agreement” had been reached with Perlis, but that the staff continues to recommend approval of the changes.

Johnny V’s has five spaces of its own, and has agreements with a nearby doctor’s office for six more and with the Shell station for 12, Kroll said, far more than the City Council had previously approved even if negotiations with Perlis fail — even though the restaurant will increase demand for on-street parking nearby regardless.

“You’d probably need at least 50 spaces to ensure that every vehicle associated with both of those uses is off the street,” Kroll said, referring to Johnny V’s and the adjoining Monkey Hill Bar. “This use will inevitably result in some demand in on street parking, both in the form approved in 2009 and in the present form. But this is an improvement.”

The public hearing was held last month, and the commissioners did not ask for any additional comments from the Johnny V’s owners or their opponents. Instead, Commissioner Lou Volz recommended denying the request, as he did last month on the grounds that permission for changes should not be granted after the fact. Volz’s motion failed by a 3-4 vote.

With that, the Johnny V’s expansion was deemed to have “no legal majority” of the planning commission, the technical term for a split vote. It will next head to the City Council without any formal recommendation from the commission and be sorted through anew.