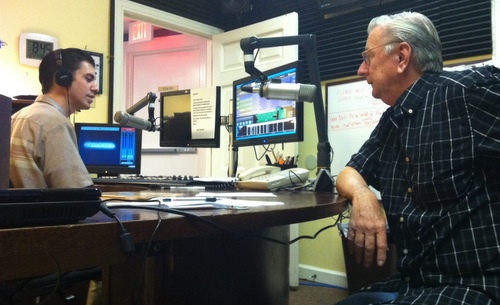 Perched in an unassuming French Market building just steps from the Mississippi River each Tuesday evening the radio personalities known as Jivin’ Gene and his right hand man Neil spin The ’50s Rhythm & Blues Show from WWOZ studios, doing so with a flare and reverence for an era of music long forgotten in many corners.  And when one listens to one of their sets, invariably one wonders “Where are they getting these cuts from?”  At times the show is packed with local nostalgia but certainly songs that maybe never even came close to the top 40.  And that’s a good thing.

I love this show.  Despite some content being 50-plus years old, the voices of the performers may be known and the stylings familiar, but on occasion the sound can plain come across as new, almost as if Fats Domino or Chuck Berry were putting out fresh material.  These songs are often the unsung staples to an era long passed, the pieces left behind that popular radio decided it could carry on without.  And that’s why, to me, the likes of Gene and Neil are more than DJs, veritable radio archivists for a not-so-distant time, guardians and guideposts to the birth of rock.

I emailed Gene some weeks ago about possibly interviewing him for a piece to coincide with this year’s Ponderosa Stomp, so he invited me up to the studio one evening.  I arrived in their set and Gene gave me a quick tour of the space and offices.  Then I sat and watched them work, asking questions between set breaks.  Here’s what I learned:

An approachable and relatively mild-mannered gentleman, Gene possesses a passion for spinning the music of his youth that spans decades, back to 1982 when WWOZ was broadcast above Tipitina’s on Napoleon.  Then he was, as he still is, a volunteer.  His moniker was bestowed upon him by the DJ he learned the craft from: Duke-A-Paducah.  In the ’80s the reward for assisting the DJs was a 30-minute set of your own which he clearly had designs on maintaining and enhancing.  Gene recalls the up and coming DJs like himself “were allowed to play records for about half an hour before sign off after the last taped show went off.”  An avid record collector, Gene may be found at garage sales and the like picking over vinyl, but being a radio personality (as opposed to television or internet) only occasionally is he recognized because of his distinctive cadence and voice; you would likely never know him from simply and only seeing him.

Gene’s first 45?  Clarence ‘Frogman’ Henry’s “Ain’t Got No Home.”  Curious, I asked if he still had his copy to which Gene paused and added reflectively “No, I lost it in Betsy – along with all my other records.”  Years went by before Gene bought records again, but once he did he collected for a while before he even had a turntable to play them on: the true sign of a dedicated collector.

With The Ponderosa Stomp marking its 10th year this week, Gene notes its founder Dr. Ike has done an amazing thing putting on the event bringing out artists that might otherwise not have had the opportunity to perform their work again.  The same could be said for Gene and Neil and their weekly Tuesday night outing as some of the cuts might never have been heard again were it not for the show.  Case in point: the mystery record!

Each week a song is chosen to try and stump the listeners a la Name That Tune.  Admittedly after decades of DJing the mystery record has grown more difficult, however like any show it is a staple and the listeners love it.  The night I sat in it happened to be Sammy Ridgely’s “I’m Dreaming” and no one got it – except Sammy Ridgely.  Calls and calls poured in, most guessing it was Sammy’s brother Tommy, who wrote the song and recorded it first.  Then I hear Gene answer the phone and seconds later laugh and say “Tommy?  Is that you!?  You can’t do that man, that’s cheating!”  The next week or so Sammy appeared on the show with Gene and Neil playing his tunes as a feature to that evening’s broadcast.

To be sure an education in ’50s rock with a New Orleans tip happens every Tuesday night, and it happens no matter where you are thanks to the world of the app and the internet; tuning into Jivin’ Gene and Neil is more easily done than ever.  Every generation has their sound, but not every generation can say theirs laid the foundation for a primary genre like the ’50s and rock.