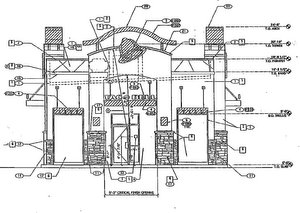 The facade of the proposed Taco Bell. (via nola.gov)

A proposal to use a home on Maple Street as an office for two child psychologists was turned down by the City Planning Commission on Tuesday, but a Taco Bell planned for South Claiborne Avenue was given speedy approval.

Dr. Lucinda Lang DeGrange said that the home she owns at 7513 Maple could already be used for her own practice, but that she had hoped to rent out one of its units to another psychologist, and for that needed a zoning change. Her house sits between two others at the edge of the Maple Street “neighborhood business” corridor, so that’s why she chose that zoning classification, she told planning commissioners.

The zoning change was vigorously opposed by a handful of neighbors who said they support DeGrange’s practice, but do not want the Maple Street businesses encroaching further in their neighborhood.

“We are sympathetic to what she wants to do, but we are unalterably opposed to changing this to B1 (neighborhood business) zoning,” said Tommy Milliner, president of Maple Area Residents Inc. “Our neighborhood is under attack. It is under almost nightly attack by bars and other commercial establishments. The idea of having a psychology office is one thing, and we are not opposed, but changing the zoning is another thing.”

Several people mentioned a different zoning classification, “RO,” suggesting it was a sort of residential-office hybrid, but planning staffer Editha Amacker pointed out that RO actually is for “General Office” zoning and is much more permissive than the neighbors realize. It’s actually intended for office-park type settings, she said, and could allow much taller buildings than neighborhood businesses.

“Some of those uses, things like hotels, are not really what you’d expect in a residential area,” Amacker said.

The commission voted 6-0 against the project.

“I know that neighborhood, and there’s a lot of commercial pressure on it already,” said Commissioner Lynes Sloss.

By comparison, the Taco Bell proposed to replace the blighted old Pizza Hut on South Claiborne got cursory treatment from the commissioners. The architect told the commissioners that the developers would accept all the city’s design recommendations, no supporters or opponents stepped forward to speak, and the project was approved unanimously without comment.

In lieu of a meaty discussion in the City Council chambers, Twitter provided a strong reaction all day in favor of the news:

7 thoughts on “Child-psychology office on Maple rejected, but Taco Bell given green light on South Claiborne”