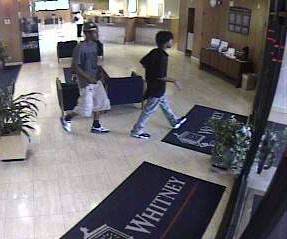 A bank surveillance image shows two men police want to question about money believed to have been stolen during a home invasion robbery on Walnut Street. (via NOPD)

A trail of stolen Depression-era dollar bills that are unusual in appearance but not especially valuable led police this week to surveillance images of two men they want to question about a violent home-invasion robbery earlier this week.

Two masked men and a woman broke into a home Saturday evening in the 400 block of Walnut Street and bound two victims with duct tape at gunpoint after subduing one with a stun gun, police have said. The robbers left with jewelry, silverware and a stack of old currency, such as $10 bills from the 1930s, police said.

On Monday, a Westbank branch of Whitney bank reported two young men who came in, asked how much a $10 bill from 1934 was worth, and then got nervous and left, said Sgt. Chris Billiot of the NOPD Second District persons-crimes division. Investigators were able to get surveillance images of the men inside the bank, which they’ve released in hopes the public can identify them for questioning, Billiot said.

The two men in the photos are not necessarily suspects, Billiot said, as they could have gotten the money from anywhere, but detectives would like to know where it came from.

To a bank, U.S. currency is generally worth only its face value, no matter its year. A collector might pay more for a specific bill from a rare series, area coin specialists say, but those instances would be highly uncommon and dependent on the coin’s condition.

“All that 1934 stuff is very common,” said Bob Reed of RR Coins and Currency in Gretna. “In low grade, it’s just spendable.”

Robert Rongey of Gulf South Coins in Metairie said Friday that a friend in the NOPD had already alerted him to the Walnut Street robbery, but that no one had come into his store this week with anything that might have matched this case.

“Reputable shops do try to look out for stuff like that,” Rongey said.

Investigators have been notified of a few instances of old currency being used at a few Westbank locations, Billiot said. The money stands out as being old, he said, and encouraged anyone who receives it in their store to contact police.

“The paper is almost like wax paper,” Billiot said of the older dollars. “It really smells different.”

To contact Second District investigators directly, call 658-6020. To leave an anonymous tip that could be eligible for a cash reward, call CrimeStoppers at (504) 822-1111.

Robert Morris of UptownMessenger.com can be reached at rmorris@nolamessenger.com, or leave a comment below. This article was developed with our reporting partners at WWL-TV.