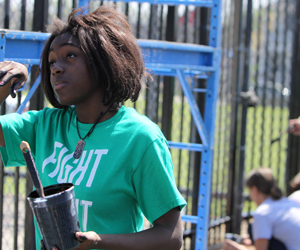 A Sojourner Truth Academy student paints at Taylor Park in Central City as a service project during one of the spring "Fight the Blight" days. (Sabree Hill, UptownMessenger.com)

With optimism that Sojourner Truth Academy will be able to remain at their current Freret Street campus for another year, students returned to class last week and school officials turned their attention on their most serious challenge for the year: reversing an increasingly perilous erosion in test scores.

Last month, Sojourner Truth discovered that the Orleans Parish School Board wanted out of the lease for the Our Lady of Lourdes classroom building with the Archdiocese of New Orleans, and that the school’s only hope for remaining there was the Recovery School District signing an extension on the lease with the Archdiocese for another year. At Tuesday evening’s meeting of the Sojourner Truth board, member Victoria Johnson asked if a lease had been secured yet.

“My answer to that is, we’re here,” answered board chair Bob Burvant, noting that it had been about 10 days since his last conversation with the RSD. “Maybe no news is good news.”

Since the issue arose in July, state officials have remained optimistic that the lease will be worked out, Burvant said after the meeting. Now that school has started, Burvant said he hopes the issue will soon be concluded.

“In my experience, it’s not that unusual that you may not get the paperwork as early as you’d want,” Burvant said.

The school board spent much of Tuesday’s meeting immersed in a presentation on school performance scores, the state’s system for measuring schools. Over its last three years, Sojourner Truth has seen its scores slip from 54.9 to 53.5 to this year’s projected 48.7 — well beneath the state’s threshold for “Academically Unacceptable,” a score of 75.

The Sojourner Truth administration has unanswered questions about the methodology leading to its latest score, said Sarah Stern, director of data and assessments. The state appears to have weighted Algebra I, where the school scored the highest, much less than an other subjects, which use an outdated form of testing — though she said she has been unable to get a definite answer on the weighting for each subject.

Next year, however, scores in several subjects will be more heavily based on the newer exams that Sojourner Truth students score better on, raising hopes for a better overall performance, Stern said. The goal, she said, is to reach a school performance score of 75, lifting Sojourner Truth completely out of the “Academically Unacceptable” category into the less-perilous “Academic Watch.”

“It’s a lofty goal, but schools have done it, and I think we’ve really set ourselves up to make that jump,” Stern says.

Even an increase of 12 points would be enough to convince state officials that Sojourner Truth is on the right track, Stern said. The school has made a number of major changes, including hiring a new superintendent, Reginald Flenory and many key administrators. It has changed its curriculum so that core subjects are taught all year, rather than on a semester basis, and students who are struggling will be eligible for after-school tutoring.

After hearing about the school’s strategies for raising the test scores, board member David Perlis asked if the school is opening itself to the traditional criticism of “teaching to the test” rather than focusing on the subject matter.

Board member Charline Wright, who chairs the academics committee, responded that “there has to be some confidence” that the end-of-year exams capture a student’s mastery of subjects like Algebra. Further, she and Stern said, the tests are what will determine the school’s future.

“The reality is, if we don’t teach to the test,” Stern said, “we won’t exist as a school anymore.”