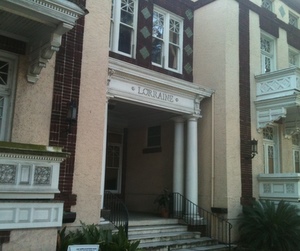 I call it “bureaucratic indifference.”  It’s when a rule is applied rigidly for the sake of rigid application, normally because some government employee or official is too lazy or obtuse to exercise intelligent and appropriate discretion.

This is the mindset that drove the New Orleans City Planning Commission to refuse to rezone the Lorraine Apartments as multi-family residential.

All of us have probably experienced bureaucratic indifference at some time or another.  Youngsters seem to be getting the brunt of it lately with “zero tolerance” rules in public schools, under which students have been expelled for bringing needed medication to school or inadvertently leaving a hunting rifle in their trunk (whether the student put it there or not).  The idea is that that drugs and guns are so bad that discretionary enforcement, even in the most extreme cases, should not be exercised.

There is even less logic behind the Planning Commission’s decision regarding the Lorraine.

The Lorraine building was constructed in 1920 as a 14-unit apartment building, before the city enacted a zoning code.  For the past 50 years, the Lorraine has been located in a “two-family residential” zoning district, but was grandfathered in under the zoning code and has thus continued to operate.  The only reason the Lorraine cannot open now is because its non-conforming use lapsed due to construction delays.

None of these facts are seriously disputed.  The Lorraine has admittedly been in poor condition, but it cannot realistically be adapted for two-family residential.  Denying the application for rezoning only inhibits the Lorraine’s rehabilitation.

So why did the Planning Commission deny the application on behalf of the Lorraine?  According to Commission chair Craig Mitchell, as quoted by Uptown Messenger it is because in cases where a historic non-confirming use has lapsed, the commission sticks to a “strict interpretation” of the zoning code.

Mr. Mitchell’s  explanation is not satisfactory.  There is no reason not to rezone for historic land uses, particularly in a city such as New Orleans.

As I have noted before, New Orleans has a proud history of mixed-use development that evolved without the benefit of zoning.  We have corner groceries,  neighborhood bars, and yes, old apartment buildings mixed in with single-family homes and duplexes.  This is an intimate part of the fabric of this city.  In essence, the Planning Commission is applying suburban zoning principles to historic districts.

There may be good reasons why the Planning Commission feels constrained.  In the case of zero-tolerance rules in public schools, school officials will readily point to parents and school boards as the parties who, either by law or by influence, require them to apply the rules strictly without regard for individual circumstances.

Likewise, it might be that the Planning Commission merely sees fit to push the issue onto the City Council.  If that’s the case, then the decision was surely a cowardly one.  This was not a contested issue.  No one openly opposed the zoning change.  The Uptown Triangle Neighborhood Association vocally supported it.

In either case, however, the Planning Commission was wrong on substance.  Zoning laws are not ends unto themselves.  Although there has been a popular outcry against “spot zoning” to carve out particular properties, there is an equal drive for “mixed use development” where different but compatible land uses coexist.  Where a land use is both historic and uncontested, there is no reason for the Planning Commission to don its game face of bureaucratic indifference and spout consistency as a basis for a ridiculous and destructive decision.

Still, recourse to the City Council does remain, although to my knowledge, City Councilwoman Susan Guidry (in whose district the Lorraine Apartments rests), has not taken any particular interest in the issue.  For everyone’s sake, I hope Councilwoman Guidry decides to side with the Lorraine and against rigid and unthinking application of the zoning code.

2 thoughts on “Owen Courreges: Save the Lorraine”