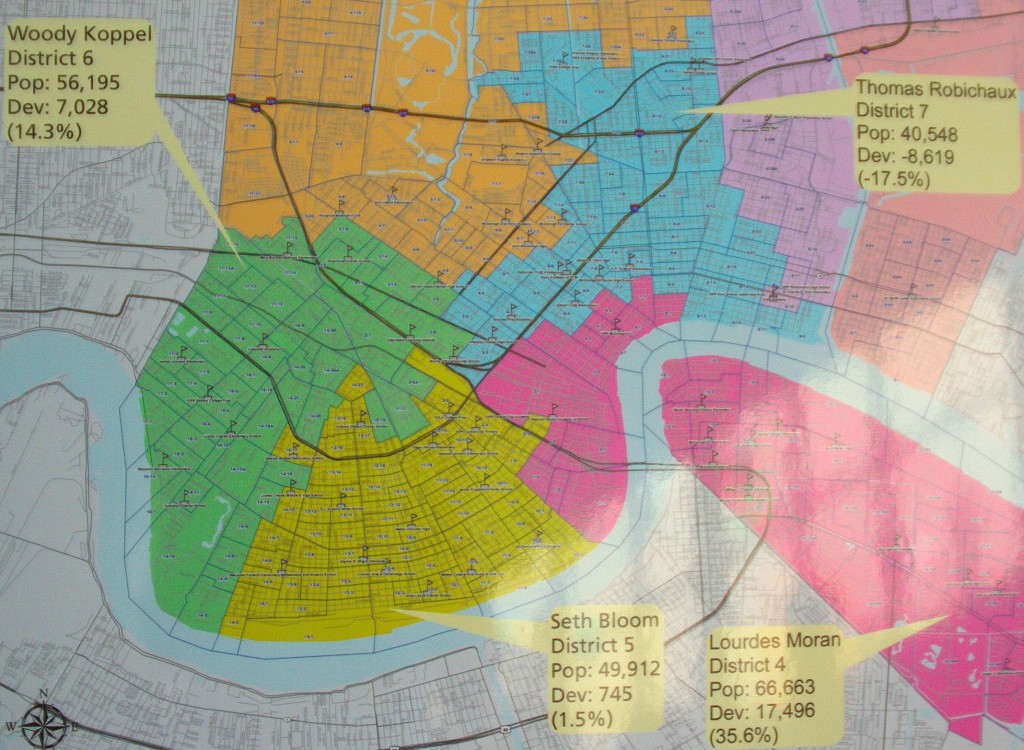 The current Orleans Parish School Board boundaries. (Click to enlarge)

Redistricting the seven-member Orleans Parish School Board could produce more dramatic changes than the recent reshuffling of the New Orleans City Council, even though the same population shifts are being accounted for, officials said Monday.

The same broad themes are at play. The districts in the East, where population loss has been most severe, will grow geographically larger toward the west, into the Gentilly, Midcity and Lakeview area. Meanwhile, the Westbank-based district where population has held the strongest will likely give up its Eastbank territory.

The effect of those changes is still unclear for Uptown, which is represented by Seth Bloom in District 5 (covering Central City, the Garden District, and the central area of Uptown) and Woody Koppel in District 6 (covering Audubon and Carrollton). Bloom’s district is very close to the 49,000-person ideal population, but Koppel’s district is about 14 percent above the target and will have to shrink, said consultants with GCR and Associates at a Monday evening town-hall meeting in District 5.

The changes will have to be made with an eye toward preserving the electoral strength of minorities, as well. Currently, four school board districts (1, 2, 4 and 7) have minority populations of well above 50 percent, with District 4 the closest, around 58 percent. Redistricting must keep the four seats well within the reach of minority candidates — not simply at 50 percent of the population, but high enough above that to account for voter turnout and other factors, said Bill Cody of GCR.

“Once you start to get to 50 (percent), that’s when you really start to get scrutinized” by the Department of Justice, Cody said.

Even though School Board District 5 has the proper population, its boundaries may have to slide in one direction or the other to help account for the other changes that must be made.

The school board is holding meetings to receive public input in each district about redistricting (District 6 will be at 6 p.m. Sept. 7 at Eleanor McMain Secondary School, 5712 S. Claiborne Ave.) before GCR will draw a variety of possible configurations for the board to examine, possibly in October. At that point, more meetings will be held, Cody said.

Other than school board members (Bloom, Koppel and District 4’s Lourdes Moran), staff and the consultants, only one member of the public attended Monday’s meeting, a representative from a Central City neighborhood group. She asked a number of questions about keeping communities of interest intact through the redistricting process, but declined to discuss her opinions with a reporter afterward.