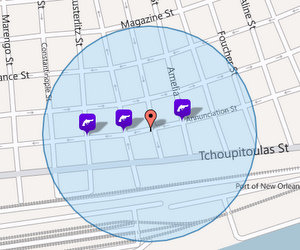 Three gun crimes have been reported this summer around the 3800 block of Annunciation Street, where a teenager was killed and another man wounded in a shooting Friday night.

A teenager was killed and another man was wounded Friday evening in a shooting in an Uptown block of Annunciation Street that has been a growing source of concern for neighbors, police said.

Two male victims were found on the sidewalk in the 3800 block of Annunciation with multiple gunshot wounds about 7:30 p.m., according to the New Orleans Police Department. The 17-year-old victim — identified as James Leon Wells by The Times-Picayune — was pronounced dead on the scene, and the 22-year-old is listed in stable condition after treatment at a local hospital, police said.

Last month, after a shooting and a separate gun arrest in June, a group of residents from that area complained to police about that precise location, the area of Annunciation around General Taylor and Peniston, complaining that large crowds congregate on the block for gambling and drug transactions, with weapons on display in plain sight.

“They’ve got guns,” said one neighbor at the July NONPACC meeting. “You’ll see them flash each other. It’s really a stressful situation.”

In the weeks that followed, Second District leadership assigned undercover officers to perform surveillance of the area. They saw the groups of men, but no illegal activity, Lt. Mike Montalbano said at the time, and no further incidents were reported there until a firearms call two weeks ago.

Anyone with information about this shooting should call Second District detectives at 658-6020, or to leave an anonymous tip that could be eligible for a cash reward, call CrimeStoppers at 822-1111.

3 thoughts on “One killed, one injured in shooting at Annunciation Street hot spot”