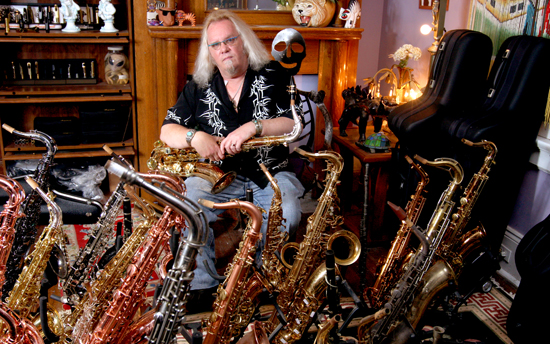 New Orleanians possess a presence that in my experience remains unparalleled, and we know our neighbors no matter what.  By this I mean we all participate in the characterization of the city, and we do so seemingly effortlessly.  Whether you’re John Goodman, John Georges, or John Fitzgerald.  You live here.  We know who you are and to a degree we don’t care.  This remains one of the reasons the celebrity set can be drawn to the Crescent City.  Anonymity in the light of day.  We don’t care if you throw Super Bowl touchdown passes, win Grammys, or sautee garlic.  It’s all the same, and you put your pants on one leg at a time like everybody else.

For years in my early days of slinging coffee at PJs on Maple I used to wait on this super nice guy.  He came in generally in the late afternoon / early evenings and always ordered a cappucino.  He was tall and real lean, salt and pepper hair usually kept under a beret or similar chapeau, and always a smile and a greeting.  But I didn’t know his name or what he did.  And it went on like this literally for years.  One day, a co-worker said to me “You know who that is, right?”  I didn’t.  It didn’t matter really.  “Charles Neville,” he said.  “Oh. (pause) Oh! (pause) Oh, okay. Well,” I thought, “he’s a cool guy.”  And good for him.  He’s Charles Neville without being “Charles Neville.”

Years later after Katrina I moved to a new neighborhood, and I met another noteworthy saxophonist in my new neighbor, though like Charles, at the time I had no idea who he was or what he did.  Initially Steve and I met while my wife and I began renovating the house next door.  He and his wife Sharon were just as welcoming and warm as could be.  And the more we got to know them, their presence became so ordinary and familiar, you could almost take it for granted.  I knew Steve was a saxophonist, but I didn’t know much more than that.  At home sporting a Monster Magnet tee or overalls or both and usually in Crocs, Steve comes across fairly unassuming, despite any distinctive eyeware or his wildish white mane a la Doc Brown.

So I began to wonder.  I know those in his industry know Steve, but do his neighbors, neighborhood, and city on the whole?  Maybe.  Maybe not.  But here’s a little insight into “the man in the purple house” next to me, a man my girls know simply as “Mr. Steve.”

JP: We’re neighbors, but for clarity: who are you, what do you do, and for how long?

SG: I’m a retired rock star and insist on being treated as such…..I haven’t played a gig for money in front of people since my retirement (due to health) eight years ago, but am still up to my eyeballs in the music business. Basically, I own a company that manufactures saxophones, including the most expensive hand made saxophones in the world which are used by many of the world’s leading artists. We also make a full line of handmade saxophone accessories, such as mouthpieces and necks, as well. I also do repair and restoration of vintage, collector quality saxophones, give private saxophone lessons, write for several different music magazines, and do a bit of consulting for other saxophone manufacturers.  And teach the occasional master class.

JP: What brought you to New Orleans?  What’s kept you here?

SG: The answer to both questions is the same: the love of a beautiful, six foot tall red head. Sharon walked into a club where I was playing and I took one look at her and told the band to finish the set without me, I was going to talk to her….next thing I knew, I was moving to New Orleans to be with her. It turned out to be a good career move, since pre-Katrina there was pretty much an unlimited amount of good paying work available if you had top drawer musical skills. Sharon is what keeps the company moving and functioning, and allows me to be creative and do what I do best. She’s far smarter than I am, and much better looking. She is also a totally obsessive New Orleans snob, and has taught me to appreciate the unique culture and fine food of this city. I have to travel a lot in my business, and am always miserable when I’m away from New Orleans. Sharon gets all the blame for that. She has trained me well.

JP: As an artist who’s been in the music business for decades, what have been the big surprises?  I mean, you’ve been through everything from disco to grunge but the saxophone stays steady as, let’s call it, “a timeless instrument.”

SG: The music business is always full of surprises, which is one of the things I’ve always enjoyed about it. When I was 17 years old, the band I was playing with got a major label record deal. Up until then, my career had been steadily ascending since beginning to play for money at age 13. Well, three years later, that band couldn’t generate a follow up hit and the label dropped us, and suddenly I found myself playing bars instead of stadiums! It was quite a shock! When I moved to New Orleans in the 1990’s, I was absolutely shocked by the very high level of playing ability the guys who were playing ordinary day-to-day bar gigs for $100 a pop had. I was really afraid I wouldn’t measure up. The expectations of the local musicians here are very, very high. They simply assume you know what you are doing. I’ve played with top groups all over the world, and you just don’t find that level of expectation anywhere else. It was really surprising to me to find that the level of musicianship you find here was in reality a lot higher than you find in New York, Los Angeles, or Nashville.

JP: What was the hit single titled and name of the band?

SG: A one-hit wonder (Southeastern USA only) in 1968, “Talk Don’t Bother Me” by The Reflections…..introduced me to the “upper level” of the business, even though the band never really caught on in spite of being EXCELLENT musically.

JP: Who are some of the more notable and unnotable (moreso, should be notable but perhaps went unnoticed by the public) figures you’ve recorded and / or toured with?

JP: LOL, So who got you started playing?  Was it something you saw in yourself or someone else saw in you?

SG: I come from a family of musicians where it’s not considered unusual to make a living playing or teaching music. My father played saxophone and piano professionally, my grandmother had been to VERY fancy music school, on my mother’s side, lots of people played professionally. There was a saxophone at our house and I joined the school band at age eleven. Lucky me, the school band director was a absolutely brilliant teacher, and stayed many an afternoon after school giving me extra lessons since I apparently showed a bit of promise. By the time I was 13, I was playing in a local rock band (the other members were all in their 20’s) and had a 19 year old girlfriend….I was hooked. I played bars all through high school (the cheerleader try-outs were not to interesting to me as a result), got a record deal when I was 17, put myself through college playing, and have been to every continent except Antarctica with a saxophone under my arm. I’ve tried an assortment of day jobs, but keep coming back to the saxophone.

JP: Every time I’ve spoken to you in the years I’ve known you your outlook is always steady and positive, and frankly refreshing.  For example, I’ll ask you how you are, and consistently you offer “Just right.”  Where does that come from for you?

SG: I can’t stand negative people. There’s pretty much something positive about any situation, and if the positive aspects are not readily apparent, it’s up to you and you alone to make the best of the situation and turn it to your advantage. I loath and despise people who make it their business to complain about everything. They should take that same energy they expend on bitching and devote it to making the offending situation more to their liking.

JP: Your path now as a musician focuses largely on teaching, repair, and sales, yes?  How common would you say your path is?  I mean, I heard on ‘OZ that Lee Dorsey when he wasn’t performing used to weld at an auto body shop.  To me, that’s crazy.

SG: My path is very uncommon. Most musicians focus only on playing, and there is much more to the music business (remember, they call it the music BUSINESS) than just performance. I’ve always been fascinated by the science of the way horns work, and being a creative sort of guy by nature, I’ve really enjoyed figuring out ways to make the saxophone play better and be easier to use. I love to teach, and feel a very strong obligation to pass along what I’ve been taught about playing by my teachers. I have other interests outside of music, of course, but am very lucky that I can earn a good living at something I love and genuinely enjoy. I think the diversity of my approach toward the music business may have a thing or two to do with my not getting bored by the industry.

JP: You’re a recent Apple convert.  Many musicians love their Apples for their work.  Have you gotten to that point or are you more old school?

SG: Moving over to Apple has changed my life. What was I thinking when I clung to those PC’s all those years? Apple products are far superior for musical purposes. I buy everything they sell, and am a walking advertisement for the company.

JP: Words of wisdom to this next generation coming up in the business?  Truisms?  Jokes?  I know you know a slew of drummer jokes, right?

SG: Remember it’s called the music BUSINESS for a reason. Sure, there’s the creative side, but ultimately it gets down to creating something you can sell at a profit in order to earn a living. You have to understand accounting, contracts, marketing, law, all that business stuff. You need to understand that if you’re a performer, you damn well better offer your audience something they can’t see on television or download off the internet, or they might just decide to stay home instead of coming to your gig. Hire the best advisors you can find, pay what they ask, and follow their advice.  Remember there’s a reason they call it dope. You can’t be too highly skilled at playing your instrument. Stop just talking about it and go practice some more.

One thought on “Jean-Paul Villere: The Saxophonist Next Door, Steve Goodson”