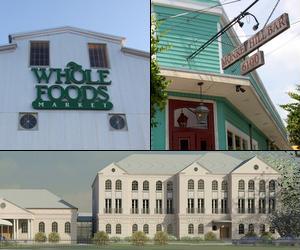 After hearing from a procession of worried neighbors, the City Planning Commission voted to reject all but the least controversial of Whole Foods’ requested operational changes, possibly reducing months of efforts by the Magazine Street grocery into an extra hour of business on Sunday and the ability to put plants in front of the store.

A major addition to the nearby Poydras Home retirement community was approved in accordance with the architects’ and neighbors wishes, but a decision was deferred on the expansion of the Monkey Hill bar into Johnny V’s restaurant amid concerns about parking and the nature of the expansion itself.

Whole Foods Arabella Station spent months negotiating with the surrounding Audubon Riverside Neighborhood Association in hopes of support for five requested changes to its operating agreement with the city: the ability to stay open until 9 p.m. on Sundays (as on the other six nights), more than one 18-wheeler per day, expanded hours in which deliveries are allowed, permission to display plants for sale on the front patio, and permission to host live music once or twice a month.

On the deliveries, the most controversial issue, the store has argued that more 18-wheelers would mean fewer smaller trucks in total, and less impact on the neighborhood. Neighbors have accused the store of violating its existing operating rules, and said the store is already a shopping destination far too large for the small surrounding neighborhood and streets that should not be given additional concessions.

Ultimately, the neighborhood association gave cautious approval to the extended hour of operation, the plants and the live music, but balked at changes to the deliveries that neighbors already complain does extensive damage to their homes and their streets. The association’s decisions did not figure prominently into Tuesday’s discussion before the City Planning Commission, but after about 90 minutes of discussion that included opposition from a dozen speakers, the commissioners dispatched both the deliveries and the live music after just a minute or two of discussion, with Commissioner Lou Volz proposing the commission recommend only the outdoor plants and extended hour on Sunday.

“Based on what we heard today, I don’t see any change in the circumstances vis a vis what happened 10 years ago when all this started,” Commissioner Craig Mitchell said, agreeing with Volz.

Commissioner Lynes Sloss wanted to deny even the additional hour, citing his sympathy for the residents who have to listen to the store’s cleanup for hours after closing time, but his idea was not picked up by the commission. Commissioner Kelly Brown said she supported the live music inside the store.

The vote was 5-2 in favor of Volz’s suggestions, with opposition from Sloss and Brown and Commissioner Joseph Williams abstaining without explanation.

The proposed addition of a three-story building on the Poydras Home campus has been generally supported by neighbors and found a friendly audience on the planning commission Tuesday, winning unanimous approval for all its requests.

The planning staff had recommended against the creation of 10 parking spaces along a new driveway to the building in an effort to preserve more of the building’s front lawn, and had also recommended design changes to the entrance of the new building for aesthetic reasons as well. Architects from Mathes Brierre, however, argued that the parking was a necessity both to serve Poydras Home’s elderly residents and to minimize the impact on the neighborhood, and that the door in question was designed with the specific needs of Alzheimer’s patients in mind.

“It is crucial for this project that we have adequate parking,” said Poydras Home executive director Jay Rive.

The commissioners agreed, restoring the architects’ plans for both the parking and the door, and voting 7-0 (with Brown absent) in the project’s favor. Mitchell noted that he originally favored the preservation of the green space, but had been swayed by the architects’ presentation.

“When you get people in and out with a wheelchair, it’s important to have people close to the door,” Sloss agreed.

A restaurant proposed next to Monkey Hill averted outright rejection so that commissioners could see the outcome over negotiations for more parking in the area.

The city has granted permission for the construction of Johnny V’s twice before, in 2005 and 2009, noted attorney Justin Schmidt. The actual construction on the restaurant, however, turned out to be more than the city agreed to two years ago, halting the project yet again.

Specifically, Schmidt said, the contractor “overbuilt” a walk-in cooler that used up a parking space outside, and added too much space upstairs. Schmidt submitted two lawsuits filed by Johnny V’s owners, alleging that the contractor forced the changes upon them in an effort to “undermine the solvency” of the restaurant before it opened and take over the lease themselves.

“The contractor just went haywire,” Schmidt said. “The more that got built, the more he got paid.”

The contractor, Francioni Builders, also submitted a letter to the commission, stating that all the work it peformed was based on the owners’ orders, and that it stopped work due to non-payment. No representative from the company spoke at the meeting.

About 10 neighbors, however, did speak on the restaurant. Three offered their support, saying the renovations will result in a nicer building than has ever stood there before. The parking will be ameliorated by agreements to use the lot at the Shell station and a lot behind a doctor’s office next to the Circle K, and any additional parking burden is the price to pay for living on stretch of Magazine with so many fine restaurants, they said.

Five others, however, opposed the project vigorously. Monkey Hill has been a poor neighbor, they said, allowing bad behavior by its patrons through the residential streets where they park. The new restaurant, they said, is too large and out of scale for a neighborhood already bearing the traffic from many restaurants.

“I think the only reason why we’re here today is because the developer got caught building more than he had permission to build,” said nearby resident Loretta Hoskins, noting a recent magazine article claiming the restaurant would have seating on two floors. “It sends a message to the business owners of this neighborhood that it’s OK to build first without getting permission, and we don’t want to send that message. …. You can’t use your contractor as a scapegoat.”

The parking issue was also raised by Sharon Perlis, who said that her family’s clothing store has never prevented Monkey Hill customers from parking in their lot before, but “it’s been abused to the point that we’re tempted … to close off our lot.” Based on a conversation earlier in the day, Perlis told the commission she was willing to try to negotiate a formal lease with the Monkey Hill and Johnny V’s owners for use of the 16 spaces at Perlis.

“If it is not mutually satisfactory, the likelihood is that we would close off our parking,” Perlis said, suggesting a deferral.

After those comments, Sloss said he would prefer to wait until the Perlis issue was resolved before voting, and the commission agreed to put off a decision in a 6-2 vote. Volz and Mitchell opposed the deferral, however, saying they had heard enough to reject the project altogether.

“When you don’t follow the prior provisos and then you want to seek ratification after the fact, I always find that troublesome,” Volz said.

To read our live coverage of Tuesday’s City Planning Commission meeting, click “Replay” in the box below.