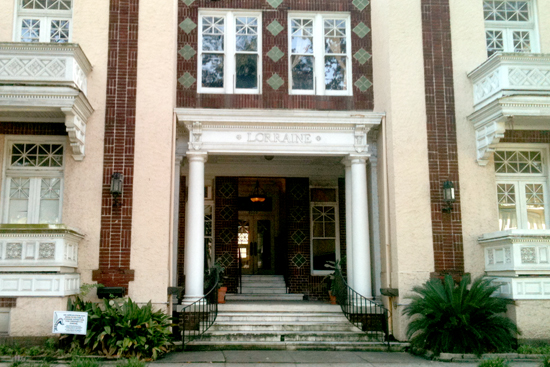 Despite an ardent appeal by neighbors Tuesday for the survival of a classic St. Charles Avenue apartment house, a city panel denied the vacant Lorraine building the rezoning it needs to reopen, leaving it in a bureaucratic purgatory with no realistic prospect for any use at all.

The 14-unit Lorraine Apartments were built around 1920, architect Rick Fifield told the City Planning Commission on Tuesday. For the last 50 years, the building has been zoned for two-family residential, and its continued use as an apartment building was grandfathered in. It was sold and closed for renovations in 2008, but when the renovations took longer than expected, the Lorraine lost its special exception and now needs to be rezoned for multi-family use in order to reopen.

The building has been stabilized and maintained while closed, and would only need about six months of renovations in order to reopen with the same 14-unit layout it has always had, said Kelley Parenton, another member of the Lorraine development team.

“We have an existing building of great character,” Fifield said. “We’re asking for a zoning change so we can put the building back into use. … We cannot imagine a use for this 13,000-square-foot building with a one- or two-family zoning.”

The development team was accompanied to the meeting by Erik Jungbacker, vice-president of the Uptown Triangle Neighborhood Association. Neighbors have a strong attachment to the building and were “shocked” to learn the city had any objection to its reopening, Jungbacker said.

“This is a very cherished building in our neighborhood,” Jungbacker said. “The restoration of this building will be a boost to this section of St. Charles.”

No one spoke in opposition to the Lorraine plans, but the commission was unmoved by the developers’ appeal. Commission chair Craig Mitchell said the loss of a building’s historic use is a situation the commissioners have seen many times, but that they stick to a “strict interpretation” of the zoning law in such cases.

The developers, however, noted that the process of changing the master plan and seeking a zoning change afterward is both long and uncertain, and said their only real hope is a successful appeal to the City Council.

“The denial will have the effect of causing the building to remain vacant,” said attorney Michael Mancuso. “It’s a weird situation, because the law doesn’t provide for a solution.”

“They could have voted for reality,” Fifield said of the planning commission.

In an interview after the meeting, Jack Davis, a member of the National Trust for Historic Preservation who lives in the adjacent Upper Audubon neighborhood, said he believes the building fits well with streetscape and adds some needed residential density in the university area.

“It was built as an elegant apartment on an elegant boulevard. It doesn’t make any sense as anything other than an apartment building,” Davis said. The area’s councilwoman should recognize its value and reverse the planning commission, he said. “Susan Guidry could ride to the rescue if she wanted.”

In other business | The planning commission also voted in favor of a request by the CVS pharmacy under construction on Claiborne to sell alcohol, and for a request by Jason Miner for rezoning to allow the Freret Clay Center nonprofit art studio to open on Jena Street along the Freret commercial corridor. All the commission’s recommendations will go next to the City Council for a final decision.