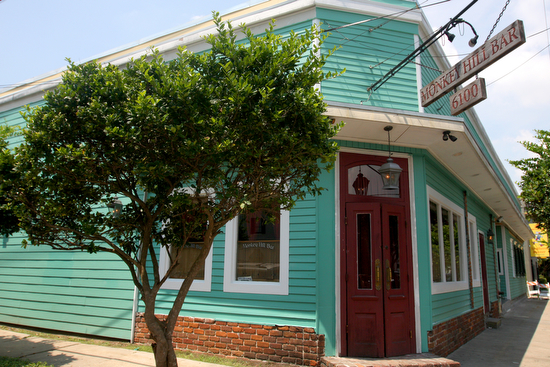 The 6100 block of Magazine, which includes Monkey Hill Bar, is planned for a new restaurant. (Sabree Hill, UptownMessenger.com)

The proposed expansion of a Magazine Street bar, the possibility of a commercial development on Tchoupitoulas, and a child-care center on a residential block are all drawing the wary attention of their neighbors in Uptown’s Audubon-Riverside neighborhood.

The agenda for the Aug. 23 meeting of the City Planning Commission includes a request at 6100-6108 Magazine Street — the address of Monkey Hill Bar — for an expansion of restaurant space and second-floor office and storage space. Audubon-Riverside Neighborhood Association board member Cele Gordon pointed out a Tuesday night meeting that the property owners have not sought to inform the neighborhood about their plans, and suggested that the association draft a letter making this clear to the planning commission.

“Our association has never been approached and [we] don’t know anything about it, so we can’t take a formal position on it,” said Tim Betbeze, ARNA vice president, agreeing with a need for a letter to the city. He also suggested the association notify its members of the public hearing in case the bar’s neighbors want a chance to comment on the expansion.

The owner of the property, Tumbleweed Properties, Inc., was previously granted permission for an expasion at the same address in 2009, city council records show. Johnny V’s, an upscale, contemporary two-story restaurant run by alumni of Clancy’s and Café Degas, was slated to open there last November, according to a Times-Picayune article a year ago.

Another imminent business opening in the neighborhood is that of Kidutopia, a child-care facility that accepts appointments 24 hours a day, planned to open a second location this month in a house at 315 Webster, according to its Facebook page. A handful of neighbors showed up at the Audubon-Riverside meeting, beseeching the board to look into the project.

In fact, the law does provide for home-based child-care facilities that serve five or fewer children, if the operator lives at the house, said one of the neighboring property owners, Claiborne Perrilliat. But neighbors said the fact that the business already operates a location on St. Charles Avenue stretches that concept, and generally said they feel that a child-care facility on such a small, residential street is a poor fit.

“No one in the neighborhood was approached at all,” Perrilliat said.

Enrico Sterling, a representative of City Councilwoman Susan Guidry’s office, said that parking issues and a curb cut described by neighbors may give the city leverage to slow the opening of the facility, and pledged to look into the issue. Seth Smiley, an attorney who serves on the neighborhood association’s zoning committee, was tasked with helping the Webster Street neighbors continue researching whether the facility can operate at that site.

Finally, the project that caused the most frustration in the neighborhood was the recent purchase of a cluster of properties at the intersection of State and Tchoupitoulas. A set of old apartment buildings currently sit on the site, but the block is zoned for “medical services,” which would permit a wide variety of commercial uses, said nearby resident Kris Pottharst.

“We’re scared out of our minds,” Pottharst said. Depending on what is built there, “everyone who has lived there for years is going to have quite a different neighborhood.”

The neighborhood has two options, Pottharst said. In the short term, the association can watch for and attempt to oppose the demolition of the apartments currently sitting on the site, effectively blocking any redevelopment there. No demolition applications have been filed with the city, however, and she says she has requested to be notified if any such permits are requested.

In the longer term, Pottharst pointed out that the city’s master plan for land use envisions that block matching the residential zoning of the surrounding homes. During the upcoming review of the Comprehensive Zoning Ordinance, Pottharst said, the association should seek to have that change to a residential category included.

[Update, 3:50 p.m. Wednesday: The manager of the apartments at State and Tchoupitoulas say the properties will remain an apartment complex. Check UptownMessenger.com later Wednesday for more details.]