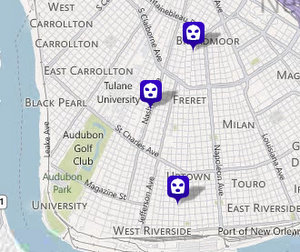 Three robberies were reported in Uptown New Orleans this week.

Three armed robberies have been reported in Uptown New Orleans in as many days, but police have made arrests in one, linked it to the second, and identified a separate suspect in the third, authorities said Wednesday.

The most recent robbery was 11 p.m. Tuesday, when a man walking on Freret Street near Nashville Avenue felt a tap on his shoulder from behind and turned to see two teenagers pointing guns at him, said Sgt. Chris Billiot of the NOPD Second District persons-crimes division. The teens searched the man, took his wallet, his Blackberry cell phone and his iPod, then fled on bicycles they had stashed nearby, Billiot said.

An officer about eight blocks away saw two teens on bicycles and tried to stop them, but they took off, though police caught up to both. One still had the victim’s iPod in his pocket, and he was booked on the robbery charge, Billiot said. The other couldn’t be identified by the victim, so police charged him with a curfew violation, and found a gun stashed partially underneath his house in the 2100 block of Valence, an address that police say is becoming increasingly notorious as a hotspot for criminal activity. It is only two blocks away from where chef Nathanial Zimet was shot in a robbery in May, noted Second District Commander Darryl Albert.

“There’s definitely some characters there who are causing problems,” Albert said.

The teens, both 16, arrested after Tuesday’s robbery fit the description of the suspects in a similar robbery the night before. About 10 p.m., a man walking near Cadiz and South Miro in Broadmoor saw two teenagers in the street ahead of him, and as he drew near one of the teens pulled a gun and demanded his property, Billiot said. The teens searched him, took his wallet and cell phone and then left, Billiot said, but investigators are hoping that the victim will be able to identify the suspects in the Freret case as his attackers as well.

A robbery at gunpoint was also reported in the 5000 block of Magazine early Monday morning, Billiot said, and although it does not appear to have any connection to the others, police have identified a potential suspect who was already sought in a number of robberies elsewhere around the city. A couple walking home from Le Bon Temps Roule about 1:30 a.m. reached their house and were smoking a cigarette on the porch when a man in a hooded jacket walked up, Billiot said. The woman gave him a slight wave, but the stranger pulled a gun and told them to give him everything they had, Billiot said. The woman tossed him her purse and the man threw him a $10 bill, and the suspect left, Billiot said.

The suspect fit the description of a man in his early 30s already sought by several other police districts for robberies around the city, Billiot said, so the Second District has begun looking for him as well.

“It’s not 100 percent, but it’s stilll a possibility it’s him,” Billiot said.

The gun found under the Valence Street house was one of six that police have taken off of Uptown streets since last week — two of which were found in separate drug raids, Albert noted. Second District officers have seized 106 guns so far this year, up from 90 this time last year, Albert said.

Investigators are also making progress in a recent high-profile burglary, that of a federal judge who had thousands of dollars of jewelry stolen from her house on State Street. Investigators now have three active suspects, thanks in part to wanted posters with a composite drawing posted all over the neighborhood.

In response to rising numbers of auto break-ins around Audubon Park, quality-of-life officers have been assigned to try to convince people using the park to do a better job of securing their belongings. Officer Wilfred Eddington said he was particularly frustrated by one man who left his key in his wheelwell with his doors unlocked, and his gun, his wallet and his computer all in plain view. “That’s a smorgasbord,” Eddington said.

Eddington waited half an hour until the man returned to his car to confront him about his carelessness. While the man was apologetic, Eddington said his frustration remained: If an opportunistic criminal had seen the car first, he could have easily stolen the vehicle and used the gun to commit a robbery the same day.

2 thoughts on “Three Uptown robberies reported this week, with suspects identified in each”