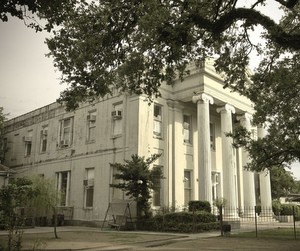 Audubon Charter School's Carrollton campus needs substantial renovations but is not scheduled for any work, one of several points in the school-facilities master plan that drew criticism Monday night. (Photo by Alysha Jordan, flickr.com/photos/neworleanslady)

Which Uptown New Orleans school buildings need attention the most and how to divide the money for building and renovating them was debated by motivated and skeptical crowd of nearly 200 public-education supporters Monday night.

City and state school officials are seeking public comment on the latest master plan for spending a nearly $2 billion payment from FEMA to rebuild New Orleans schools, and Monday night’s meeting focused on buildings in the Orleans Parish School Board’s Uptown- and Carrolton-based District 6. Supporters of the various schools showed their allegience in T-shirts and signs, and during a somewhat free-form input session inundated officials with their opinions.

Lusher Charter officials asked why their buildings, which house one of the largest student populations in the city, are in an unfunded third phase of the plan. Basic renovations such as roof repairs to stabilize the buildings should come sooner, they argued. “What we’re asking for is for the building to be stabilized, so it does not deteriorate,” said Lusher High School principal Wiley Ates.

Likewise, Audubon Charter supporters asked why their Carrollton campus is not planned for any renovations at all, despite the severe need. The plan should focus more attention on school programs that have been successful, several people said.

A group of Riverbend residents continued their advocacy for the $16 million in renovations planned for Johnson Elementary be moved to the nearby Priestley site instead, ultimately selling off Johnson instead of Priestley. Meanwhile, Gert Town residents continued their fight against the demolition of the Mary Church Terrell site in their community.

While Morris Jeff supporters were pleased by the plans for the Fisk-Howard school, they were frustrated by the lack of assurance that their program would be assigned to it. When officials replied that school repairs were being planned before school assignments, OPSB member Woody Koppel replied that a “transparent policy for assigning schools” is also needed.

One of the only satisfied groups in the room were the Hollygrove residents supporting the rebuilding of the Dunbar school on Forshey Street. Built in 1935, the school has been demolished but the site is funded for a $24 million new school in the plan’s upcoming second phase. “We allowed it to get torn down, but we want a 21st century school,” said Shirley Butler, whose daughter attended Dunbar. “We’re very pleased with Phase 2.”

At times, the debate took on a more general character: should the emphasis of the plan be on repairs to existing facilities or replacing those that have been destroyed? Considering the long neglect and nearly unusable state of the restrooms at Audubon’s Carrollton campus, for example, parent Shawn Bowen said any plan that still does not address them should be re-evaluated.

“I feel for the people in the district that don’t have a school or facility in their neighborhood, but I’m hard pressed to say we should spend $23 million or some ridiculous amount of money to establish a new program there,” Bowen said.

But others, such as the Dunbar and Terrell supporters, argued that a school forms the heart of a community, and rebuilding and reopening them will help bring neglected neighborhoods back.

“We’re going to come back,” Butler said of Dunbar. “We’re not going to be pushed to the side.”

With such major questions unaddressed, many meeting attendees were frustrated with one question that asked what specialized facilities (such as extra labs, gyms, performance spaces or ROTC rooms) should be assigned to each high school in the city. And while the unusual public-input format — splitting the large crowd into three groups each with their own moderator — allowed for more comments in a short time, it also created a general sense of chaos that made it hard for anyone to hear or get a sense of the big picture, attendees said.

These sessions will take place all over the city (including a meeting for neighboring neighboring District 5, which runs from Uptown to the Lower Garden District, at 6 p.m. Tuesday, July 26, at Dryades YMCA, 2220 O.C. Haley Blvd.) through the end of July, and an updated version of the plan is expected in August. While no changes were promised Monday night, attendees seemed to give school officials some benefit of the doubt for taking the time to listen.

“What we said got heard. It was written down. It got recorded,” said Patty Glaser, Lusher’s director of curriculum and development. “Whether or not it will be acted on, we’ll see.”

Likewise, supporters of the Priestley site said they felt they made some progress in their own battle.

“It’s not over with,” promised Anne Wolfe Nicolay, president of the Carrollton-Riverbend Neighborhood Association. “It’s not done.”

Ramsey Green, deputy superintendent of operations for the Recovery School District, said the goal is to use the FEMA money in the most effective ways possible, but that some needed projects still need a plan to be paid for locally.

“We don’t want to do inferior renovations that will only get you another five years out of a building,” Green said. “So what do you do when the federal money runs out? Something’s got to be paid for other than with federal money.”

With that said, the public-input sessions are a crucial part of determining priorities, Green said. He described the draft master plan as a “straw man,” a specific set of recommendations for the community to make changes to.

“I have absolutely no doubt it will change,” Green said. “Is this the ending? No, this is the beginning.”