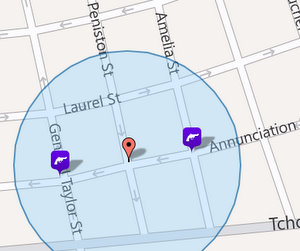 The area of Annunciation Street around General Taylor and Peniston is becoming a hotspot for gun and drug activity, concerned neighbors said. This NOPD map shows the two gun cases in the area from June.

A large crowd of men who congregate on Annunciation Street playing dice and flashing guns at one another represent a growing problem that should be stopped before it becomes a tragedy, neighbors told Uptown-based Second District police Wednesday at their monthly community meeting.

The activity is centered on a block of Annunciation near General Taylor and Peniston, where dozens of men will gather in broad daylight for what appear to be drug deals, looping around the block on bicycles with ample weapons on display, neighbors said. Residents have been calling police for whatever violations they see, but the men only disperse when the police car actually comes, and reappear when police leave, they said.

“It’s amazing how organized they are. When a marked car comes, they just kind of disappear,” said one man at Wednesday’s meeting, who asked that his name not be printed to prevent any retaliation. “They’ve got guns. You’ll see them flash each other. It’s really a stressful situation.”

Residents complained of a recent shootout on the street, and NOPD crime maps record an incident of firearms being discharged at 7:30 p.m. June 25. As they described their problems, NOPD Lt. Mike Montalbano pointed out that a gambling call in that same exact area led to a gun arrest in early June during saturated patrols intended to stem the wave of robberies in May.

NOPD Commander Darryl Albert of the Second District thanked the handful of residents for speaking, and asked them to provide his investigators with further details outside the meeting. Their information, Albert said, should be enough to begin directing some targeted enforcement at the problem.

The meeting also included a review of June crime statistics and a discussion of the NOPD electronic monitoring program. To read live coverage of the meeting, click “Replay” in the box below.