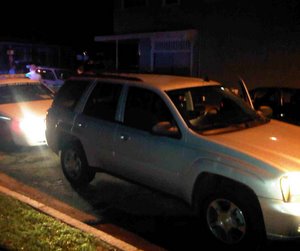 A Chevrolet Trailblazer sits on Danneel Street at the edge of the Newman School campus where it was abandoned Monday night in an attempt by its occupants to escape from police. (Robert Morris, UptownMessenger.com)

A group of teenagers fleeing police in an allegedly stolen SUV with a pistol in the back abandoned their vehicle at the edge of the Isidore Newman School campus in Uptown New Orleans, and two were caught moments later hiding in a Newman warehouse, authorities said.

Shortly before 9 p.m. Monday, police received a report of a possibly stolen Chevrolet Trailblazer on Louisiana Avenue, and the officer who found it driving there attempted to pull it over, said Sgt. Eric Gillard of the NOPD Sixth District task force. The Trailblazer turned into the neighborhood and at first kept a steady speed and obey the traffic signs, but as the officer continued to follow it with its lights on, the SUV began driving more recklessly, so the officer broke off, Gillard said.

Other officers had reached the neighborhood, however, and saw the SUV parked on Danneel Street with its doors open at the edge of a field owned by Newman about a block from where the first officer had stopped following. “We had cars all around here, and we set up a perimeter,” Gillard said.

Patrons sitting in front of the Neutral Ground Coffee House then pointed the officers up Danneel toward Newman’s warehouse at Dufossat, said Sgt. Russell Philibert of the Second District task force.

“They said, ‘The guys you’re looking for ran that way,'” Philibert said.

Inside the warehouse, officers found two teenagers, whose names police cannot release because of their age, Philibert said. Witnesses along Dufossat told police they saw two people more running down the street, but they were not located, Philibert said. 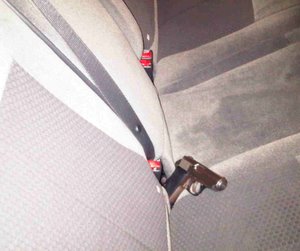 A loaded .380-caliber semi-automatic handgun sits in the back seat of the SUV. (Robert Morris, UptownMessenger.com)

A loaded .380-caliber semi-automatic handgun was found in the back seat of the SUV. The two teens arrested will be charged with possession of a stolen vehicle, unauthorized use of a vehicle and juveniles in possession of a weapon, Gillard said.

The initial investigation suggests that the teens may have been heading for a house in the 2100 block of Valence that has been a center of criminal activity of late, but that they overshot once the first officer got behind them, Philibert said.

“I guarantee they would have tried to rob somebody,” Philibert said. “It’s a good thing there were witnesses all along the street.”

Inside the coffeehouse afterward, barista Daniel Rigamer said his patrons were unsure of what was happening outside, but none were particularly concerned. They were expecting a large crowd for the return of Monday regular act John Pult and the Genial Orleanians, and began fielding phone calls from people who wanted to come to the show but couldn’t get past the police perimeter.

“We pretty much carried on. I told the act to keep playing because the next guy wasn’t going to be able to get through,” Rigamer said. “Like any good New Orleans place, we just kept on going.”