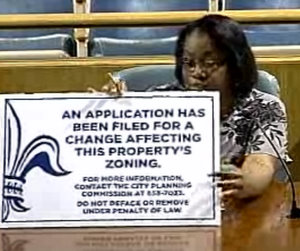 City Planning Director Yolanda Rodriguez holds an example of the new signs that will be required for any property requesting a land-use change. (via nolacitycouncil.com)

Facing a crowd of well more than 100 mostly-angry neighborhood residents in January, City Councilwoman Susan Guidry had little to assuage their ire. The owners of the Romney Pilates studio under construction on Magazine Street obtained permission to build legally, she said, even if very few neighbors knew about it until it was too late.

Guidry pledged, however, to correct the city procedures that allowed such a major project to be approved without neighbors’ knowledge and permitted the owners to begin construction on a building that bore little resemblance to at least one of the designs they showed the city. The bad memory of the Romney Pilates experience has haunted nearly every subsequent Uptown land-use issue this year, but Guidry unveiled a package of solutions to it Wednesday morning. 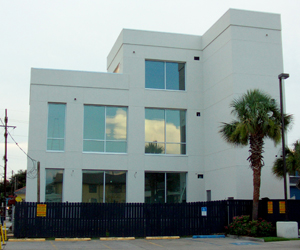 “What brought this to our attention was a situation with the Romney Pilates on Magazine Street, where the Board of Zoning Adjustments had agreed to some waivers and variances … and we learned about this only when construction began,” Guidry said at Wednesday morning’s meeting of the City Council Government Affairs committee, which she chairs. “What we learned from the experience was that our notice requirements could be stronger, and that we needed to guard against a situation where an owner or developer submits one set of plans to get the variance, and then another set of plans to Safety and Permits.”

The solution proposed by Guidry and a set of city staffers has several components. First, anyone requesting any land-use change will be required to post a large sign in front of the property for two to three weeks prior to the hearing before the city. Second, the city will mail a notice to the occupants and owners of any address within 300 feet of the project’s property line — which, in the Pilates case, would have notified most of its block and parts of a few surrounding blocks — while also attempting to contact neighborhoods electronically. 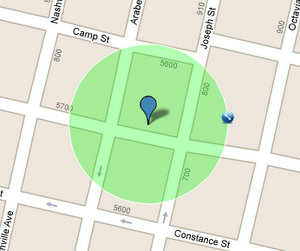 An approximation of a 300-foot radius around the Romney Pilates location shows that most of its block and portions of five adjacent blocks would like have been notified under the city's new rules.

Finally, any plans approved must be signed and stamped by city officials before building permits are issued.

“”I think we’re doing about everything we can to get notice out at this point,” Guidry said. “If anyone’s looking for notice, they ought to be able to find it.”

Councilwoman Kristin Gisleson Palmer asked whether a rendering of the proposed project could be placed on the sign — a possibility the city planners said they would explore.

“I know other cities do it, especially when you talk about new construction, and that really gives people an idea of what’s being built or what’s being proposed,” Palmer said. “If that happened, of course, probably Pilates wouldn’t have happened.”

For an initial 90-day trial period, the primary components of the plan – the signs and mailings – will only apply to the issues coming before the City Planning Commission, which handles broad land-use issues such as zoning changes and conditional uses. During this time, the mayor’s office will cover the cost of the program. At the end of the trial period, the city will have to amend its budget if it wishes to make the program permanent, city staff members told Guidry.

At that point, the property owners and developers applying for the the changes should be charged for the costs of notifying their neighbors, Guidry said.

“I’m all for whoever’s applying can afford a sign,” Guidry said.

The program technically began already on June 28 in anticipation of the July 26 meeting of the City Planning Commission, which includes Uptown zoning issues related to 8116 Oak Street, the CVS Pharmacy being built at Napoleon and Claiborne, the Newman school on Jefferson and a residential lot at 2222 Peniston.

The test program will end September 26 and afterward be brought to the city council for full consideration, officials said.

2 thoughts on “City to require more signs, mailings after uproar over Pilates studio”