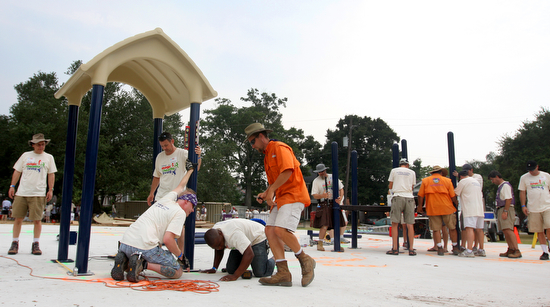 After years of hopes and prayers, the angels finally descended this weekend on Palmer Park, hundreds of them — and they were wearing fatigues, tool belts and mouse ears.

Neighbors from Carrollton and around Uptown New Orleans joined with volunteers from Disney and a nonprofit known as KaBOOM! all converged to give the park a total makeover with a large new playground as a centerpiece.

“Only one out of five children have a safe place to play within walking distance of their homes,” said Danielle Trezek, project manager for KaBOOM!. “We’re fighting to end the play deficit.”

Sunday’s project was the culmination of years of work by the Friends of Palmer Park, a group of neighbors and caretakers of the park who banded together as they rebuilt their homes and community after Hurricane Katrina. At first, the committee focused on individual beautification projects — hanging wreaths from the lamp posts at Christmas, for example — but the replacement of park’s old, metal, circa-1980 playground equipment was always a long-term goal.

“We all got to know our neighbors after Katrina in a way we hadn’t before,” said member Erin Ribka. “Because the park is such a focal point for the neighborhood, we thought trying to improve it would be an excellent first step for community building.”

Two years ago, after a KaBOOM! build at her children’s school, Ecole Bilingue, Ribka filled out a survey and mentioned how much she’d like to see a similar project at Palmer Park. She heard back from the organization less than 24 hours later, urging her to apply, and Palmer Park went on the list to await a donor. In mid-April, Ribka found out that Palmer Park would receive an award from KaBOOM! based on a grant from Disney, and the planning quickly accelerated. Neighborhood families sketched designs for the park and sent them, received several options in return and voted for their favorite.

“This was the design that far and away the most people liked,” Ribka said.

Though the playground itself is magnificent — equipped with an adventure bridge, a climbing wall, roundabout monkey bars and a triple-racing slide and even a classic swingset — organizers were just as proud of the other work under way around the large park on Sunday.

“The biggest thing about the project is that it’s more than just a playground,” Ribka said. “We’re really getting a facelift for the entire park.” 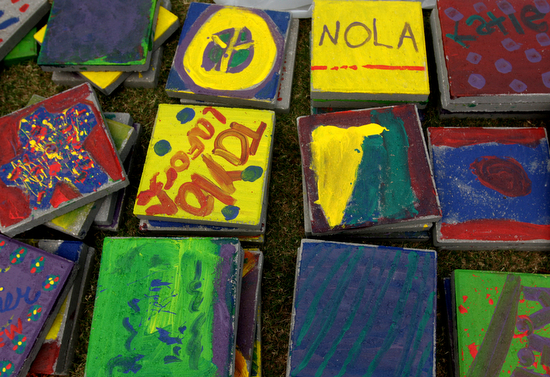 Pavers for the walkway to the new KaBOOM! playground. (Sabree Hill, UptownMessenger.com)

The iconic entry arch on South Carrollton — only a year short of a century old — was restored Sunday in historically accurate colors. Flower beds, lamp posts, trash receptacles and even the flagpole all received attention. From the sidewalk to the playground area is a pathway made of pavers hand-painted by neighborhood children, with their names, their handprints and their designs in colors dominated by purple, green and gold.

In five large broken areas of the sidewalk around the park, glass artist Paulette Lizano designed porcelain-tile mosaics – one depicting the Carrollton neighborhood, another with a grand fleur de lis, and one with Louisiana irises. Lizano, who got involved through her regular appearances at the monthly Arts Market of New Orleans, laid down the central images, and volunteers filled out the mosaic’s backgrounds.

“We even had some 3-year-old help,” Lizano said. “They’re very hands-on by everyone in the community.” 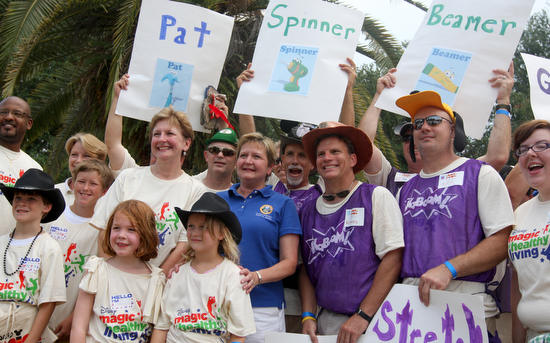 This year, KaBOOM! will celebrate its 2000th playground — and Palmer Park is the 78th project in New Orleans alone. After Hurricane Katrina, the organization committed to 100 parks across the Gulf Coast in 100 days, but kept its focus on New Orleans afterward.

“It’s obvious the spirit New Orleans has to reach out for help and to work together to make an event like this,” Trezek said.

Based on all the various groups bringing volunteers — the neighborhood, Disney, the National Guard, and Points of Light — Ribka had been led to believe about 200 people would show up to help build. On Sunday morning at the registration tent, however, all 350 sign-in sheets were used, and organizers had to start turning people away.

“It’s been amazing,” Ribka said, beaming as she surveyed the teams all over the park. “I told them this morning, if you see me crying, just give me a tissue. I’ll be OK.” 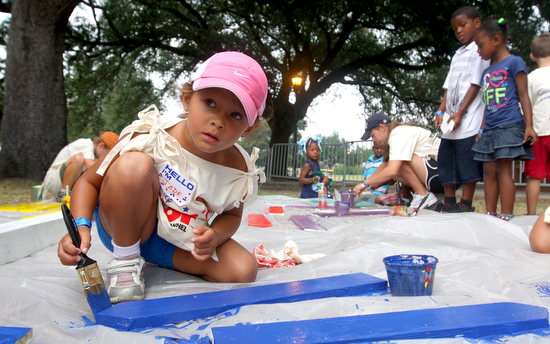 3 thoughts on “New playground is born at Palmer Park”