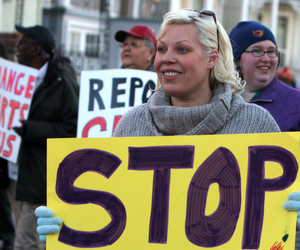 The anti-crime march held in Milan was the largest in the Second District over the last year. (Sabree Hill, UptownMessenger.com)

Months of organizing against the roots of violent crime in the Milan community will culminate tonight (Wednesday, June 8th) with a block party featuring food, kids’ activities and an assessment of the progress made so far.

On behalf of the neighbors of the Milan Focus Group on Crime and Neighborhood Housing Services, I invite you to help us create a safer neighborhood by attending our first “Community without Violence” Block Party on Wednesday, June 8 from 5:30pm – 7:00 pm at the 2100 block of General Taylor.

As the heat of the summer sets in and violent robberies are on the rise in the area, neighbors are uniting to celebrate the strength of our community and stand up against violent crime in our streets.

We ask you to stand with us. At the block party, we will connect with each other, meet district police officers and city officials, and share resources for preventing crime on our blocks. The event will include
free food, art projects for kids, ice breaker activities, and a short program by neighbors and New Orleans Police Department, 2nd District Commander Darryl Albert.

The Milan Focus Group is made up of active neighbors in the Milan area, committed to eliminating crime in the area, and includes representatives from several neighborhood associations, churches, and more.

Since October 2010, we have met monthly to create strategies for reducing crime. We have organized neighborhood clean ups, trained ourselves on using phone trees to report crimes, attended NONPACC
community police meetings, and we are currently part of Neighborhood Watch training with the NOPD. In January, we organized the largest crime walk in the city – yet our neighborhood is still rampant with
violent drug and gun related crimes.

Two months ago, we submitted a petition from the neighborhood asking the 2nd District officers and Command to focus all possible tactics and energies on only 3 specific neighborhood “hotspots,” and setting the date of the “Community without Violence” block party, June 8th, as the deadline for NOPD to demonstrate a real reduction in crime in our community. This event will be the unveiling of the success of those efforts.

Join us to eliminate violence and promote peace in our neighborhood at our “Community without Violence” Block Party on Wednesday, June 8 from 5:30pm-7:00pm at the 2100 block of General Taylor.