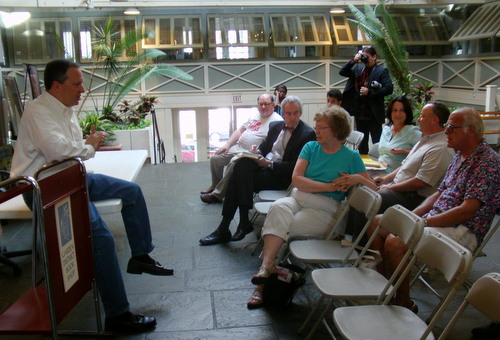 So much for the pitchforks. Nobody even bothered to bake a banana cream pie.

It was difficult to know what to expect from a Friday evening book signing in Uptown New Orleans by former FEMA director Michael Brown, who resigned only weeks after Hurricane Katrina made him a national whipping boy for governmental ineptitude.

“I want to commend Michael for putting himself in the line of fire,” Garden District Book Shop proprietor Britton Trice said in his introduction, noting that Brown’s appearance in New Orleans brought an unusual element of controversy. “It’s not too often we get complaints about events we host.”

The firing line Friday night, however, was fairly thin. Not counting the seven journalists in the audience or the bookstore’s staff, the total crowd of people not being paid to be there numbered about 10 people, including two children and one man in a shirt that read “FEMA sucks.”

That meager turnout, Brown might have argued, played to the point of the book he was promoting, Deadly Indifference. Named not for the Bush administration’s response to the breach of their levees, the book’s title refers to what Brown says is its main purpose: awakening Americans from the dangerous sense of complacency that settles in between catastrophes, natural and otherwise.

“I don’t care how angry you are. I just want you to read it and think about, are you ready?” Brown said. Not being prepared for the dangers you know your environment poses risks not only your life, but also the lives of others. “We owe it to all these firefighters and rescue workers to be as prepared as we can. As powerful as we think we are, Mother Nature is more powerful than anything we can imagine.”

That message formed the overt theme of Brown’s comments Friday night: Six years after Katrina, the most important task is not assigning blame, he argued; it is applying the lessons from that disaster to prepare for the next one. But, if anyone, did want to pass blame around, Brown had a few suggestions: your local and state officials, and a myopic media corps.

One mistake Brown did admit to was that during his press conferences, he would use the White House and FEMA talking points that were factually correct but contextually inaccurate. Trucks were coming in from everywhere, he would say in public appearances, and that was true, but then those same trucks would hear reports of looting and divert elsewhere. The American people, Brown said, “can handle the truth,” and the country would have been better off if officials had simply said that trucks were headed to New Orleans but that FEMA was having difficulty getting them to their destination.

Brown’s narrative of redemption through preparation was not wholly adopted by his small audience, but neither was it entirely rejected. Instead, they largely delved into their own unanswered questions.

John Pope of the Times-Picayune, for example, wanted to know about Brown’s depiction of President Bush. Wasn’t he being a little hard on the President, essentially showing him as just a jocular, disengaged frat boy?

That’s not necessarily a criticism, Brown replied — it’s just who Bush is. As soon as the media left a press briefing following the previous year’s tsunami, he recalled by way of example, the man who famously called him “Brownie” began teasing him about his new suit, “just for the hell of it.”

“He made you a punch line,” retorted an audience member. “But I’m sure he would be a nice person to share a line of coke with.”

Alan Drake, the Lower Garden District resident in the “FEMA sucks” shirt, queried Brown about the minutiae of missed opportunities in the response. The two argued about the particulars of which airlines were flying for how long prior to the storm, and Drake unsuccessfully demanded an explanation as to why a particular vessel, the hospital-equipped USS Bataan, was deployed to Mississippi rather than New Orleans.

Complaining that New Orleans was “trial and error” for the federal government, Acquanette Bornes said she remains frustrated by the lack of urgency before the storm.

“When they first gave that warning for a voluntary evacuation, they should have started getting people out,” Bornes said. “An ounce of prevention is worth a pound of cure.”

David Crais of CraisGroup, who served on the Bring New Orleans Back Commission, asked Brown at length about the private disaster responders from Florida and Texas that poured into New Orleans. That industry sprung up after Hurricane Andrew — why were New Orleans-owned companies not a part of it? Crais asked.

“Many prominent business people hand no idea this kind of industry was out there prior to Katrina,” Crais said. “You could just feel the recovery being taken over by FEMA contractors.”

“It was always there,” Brown replied.

A woman from Ohio who said she worked as an environmental assessor for FEMA for six months after the storm suggested that the agency’s major failing was that it wasn’t designed for disasters of New Orleans’ scale — it was accustomed to hurricanes and other events that occured quickly, destroyed a set amount of property and endangered a contained number of lives, and then promptly left so that officials could begin the cleanup. Brown agreed somewhat, but added that overzealous attention to terrorism in the Department of Homeland Security “to my absolute consternation and vociferous objection, both within the administration and without, sucked the resources out of FEMA.”

That point led to one of the only questions about the current state of disaster response in America.

“I believe our government is only as good as it treats its lowliest citizens,” said Uptown resident Jane Wolfe. “Do you think the lowliest citizens are better off today than they were five years ago?”

“I think they’re still stuck,” Brown said, suggesting again that the response will only be as strong as the local government’s leadership.

Other than the theatricality of Drake’s shirt, the only real attack on Brown was so subtle it might have been missed. Blogger Jeff Bostick of The Library Chronicles, though subdued throughout the discussion by a hangover, asked Brown afterward to sign his copy of a “River Road Recipes” cookbook — a sly reference to emails showing Brown’s need for more time to eat in a crowded Baton Rouge restaurant while staffers in New Orleans tried in vain to reach him with dire news that the 17th Street Canal levee had fatally breached.

Overall, however, the event was tame enough that Brown could plausibly say afterward that his first stop on his return tour of New Orleans went “very well.”

“Even the guy in the “FEMA sucks” shirt was willing to sit and listen,” Brown said.

One thought on “‘Indifference’ marks Brownie’s return to New Orleans”