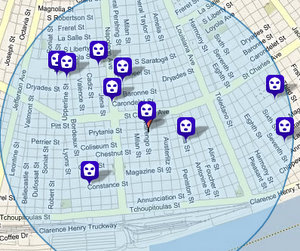 Map of robberies since May reported within a mile of Sunday morning's report at Marengo and Perrier (shown by the red marker in the center). (via NOPD.com)

Another armed robbery was reported early Sunday morning in an area of Uptown that has been plagued by holdups over the last month, though investigators are having difficulty following up with the victims, they said.

The suspect was described as a thin black man wearing a tan shirt, black pants, a baseball cap, police said.

Officers with the Second District have had difficulty making contact with the victims since the incident either by phone or by knocking at their front door, police said.

At least 10 armed robberies have been reported within a mile of that intersection in the last month, including one just a block away on May 18, according to NOPD crime maps.

Commander Darryl Albert urged residents to be mindful of their surroundings at all hours.