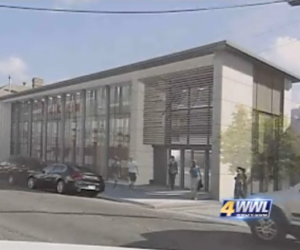 This modern design for a Walgreens on Magazine Street drew some outcry from neighbors, prompting developers to create a redesign that will be presented to the public in a meeting July 12. (image via WWLTV.com)

With Walgreens moving forward on a store in the old American Legion hall on Magazine Street and no land-use changes required from the city, the developer on the project is holding a second community meeting to share new designs for the renovated building.

At a meeting in March, neighbors were as concerned about the modern, glass-fronted design proposed for the building as they were about any other issues. Architects have since redesigned the building, and will present their plans at 6 p.m. July 12 at a meeting at the American Legion hall.

According to an email from Karen Duncan, president of the Upper Hurstville Neighborhood Association:

Stirling Properties will hold an open public meeting on July 12th at 6:00 pm at the American Legion Hall to discuss how Stirling plans to minimize impact on the neighborhood during construction. In response to numerous requests, Stirling will also present the revised facade design of the building. Stirling went back to the drawing boards after the last public meeting and studied the historical design influences found in the Magazine Street corridor. The architects then utilized those influences for the new design. The new facade now has added brick, an awning structure, and the large facade is separated both horizontally and vertically to create a more pedestrian friendly scale.