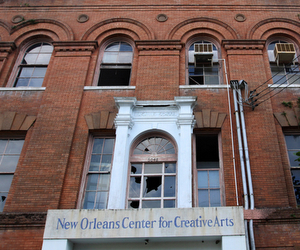 With tentative neighborhood support after a meeting with the new owner of the former NOCCA school building, high-end condos are emerging as a likely next life of the century-old Uptown New Orleans landmark.

Developer Jim MacPhaille met June 8 with the zoning committee of the Upper Hurstville Neighborhood Association to discuss options for the old LaSalle School on Perrier, and left with their preliminary agreement with a plan to convert it into a development of about 15 to 18 high-end condos with a few standalone homes on the side of the property. The condos would likely sell for $400 per square foot, he said, and the site would likely have about 48 parking spaces on it.

MacPhaille, who placed a winning bid of $2.45 million on the building April 28, told the group that he has also been approached by an unspecified French school and a nursing home developer to buy it instead, and that because he is scheduled to close the sale of the building with the school board at the end of the month, he needed to know the neighborhood’s general opinion soon.

“The process, unfortunately for condos, right now is about an eight-month process for condos. We didn’t want to do the zoning change if we didn’t have neighborhood support,” MacPhaille said Wednesday about the zoning process through the city. “We’re now trying to make a determination what we can do wth the building. I just don’t want it torn down.”

The neighbors’ first preference was for single-family homes on the whole lot, said Upper Hurstville president Karen Duncan. But between condos and a higher-density use, the neighborhood strongly prefers condos, she said.

“If we could wave a magic wand, we’d prefer single-family dwellings, but that’s probably not econonimcally feasible,” Duncan said.

MacPhaille said that demolishing the historic building for a new-home project would likely be impossible in its own right.

“The city wants it to stay,” MacPhaille said. “You couldn’t tear it down if you wanted to.”

The association will likely have strong opinions on the details of the project that will impact the neighbors, such as the outdoor lighting, fencing, the parking configuration and other issues, Duncan said, but said those are questions for later meetings.

“There’s a lot of details that would make a difference to us, but it’s unrealistic to even talk to Mr McPhaille about that right now,” Duncan said.

MacPhaille said he and his wife are still in the process of making a final decision for the property, and that he plans to meet with Upper Hurstville again soon after he closes on the sale.

“Whatever we do, we’re going to go to them first,” MacPhaille said.

One thought on “Developer, neighborhood reach early accord on condo project at former NOCCA site”