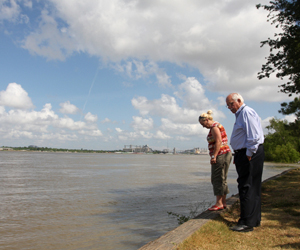 The rising levels of Mississippi River are consuming conversations across the city.  This Sunday, curiously got the better of me and I woke up early and decided to walk over to the river levee.  The river was, and remains, disturbingly high.  At the Steamboat Natchez, the flood gauge read about 15.5 feet.  Where normally you would see several yards of rock on the banks, you could now only see about one yard, if that.

Some are saying that this is a 500-year flood event.  The Bonnet Carre Spillway and the Morganza Spillway have been opened simultaneously for the first time since 1973.  The Birds Point Floodway in Missouri had already been blasted open, the first time in history all three have been utilized.

The opening of the Morganza Spillway has caused media attention both here and abroad because it will result in the flooding of thousands of homes.  The London Telegraph told of “thousands of homes sacrificed to save New Orleans.”  ABC News headlined “Cajun Country Sacrificed to Save Cities.”  The Daily Mail bemoaned the “Human cost of saving big cities” at the expense of small towns.

In other words, the media has been presenting this event as a matter of the Atchafalaya Basin being flooded to save New Orleans.  This is a narrative we’ve all heard before – that others are unfairly made to sacrifice for flood-prone New Orleans.  We heard it time and time again after Hurricane Katrina from those naysayers who argued that we shouldn’t rebuild.

It’s also a narrative based on a falsity.  There is not, and never has been, a stark choice between saving New Orleans and sacrificing others.

I’m not an engineer nor a policy expert on flood control.  However, I do know some basic facts.  First of all, the Morganza Floodgates were installed in 1954.  Accordingly, those living south of the floodgates have long known that they are living in a spillway.

So why the stories of sacrifice for the sake of New Orleans?  Again, I tend to think it feeds the narrative established after Katrina, the notion that New Orleans is too disaster-prone and too demanding.  This narrative is repeated because it’s easily understood, even if it’s completely false.

The truth is that New Orleans is not uniquely prone to natural disasters.  Florida is struck by far more hurricanes.  California is prone to earthquakes and landslides.  “Tornado Alley” is prone to, well, tornadoes.  Nobody questions decisions to protect and rebuild these places, or implies that they have an unreasonable sense of entitlement when they ask for help.

9 thoughts on “Owen Courrèges: The latest lie about New Orleans”