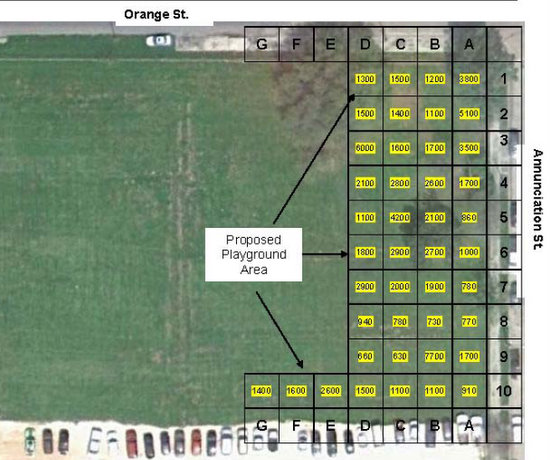 Lead levels in the soil at the proposed temporary site of Audubon Charter School are the highest one scientist has ever seen in New Orleans, but he assured a cafeteria packed with concerned, angry and sometimes unconvinced parents Thursday night that the remediation techniques he suggests will make the campus safe.

“This is the highest lead I’ve ever seen,” said Dr. Paul Lo, a certified lead inspector and lead risk assessor with Materials Management Group Inc., who has headed recent remediation efforts at playgrounds around the city. “But your children are not going to play on the existing conditions, and that’s a fact.”

The Broadway campus of Audubon Charter School is about to embark on a two-year renovation project, but officials were unable this spring to locate a suitable temporary building for the students who will be displaced. What they found instead was a vacant lot at the corner of Annunciation and Orange in the Lower Garden District where they plan to create a campus of modular buildings, but soil tests of the playground area there have revealed lead contamination in the soil that exceeds federal limits by 10 times or more.

The primary threat of lead poisoning comes from direct ingestion of tainted soil or inhalation of lead dust, Lo explained to a Thursday night parents meeting of Audubon Charter School. But removal of tainted soil often uncovers more contamination underneath, so officials instead create a secure covering for the soil: First, they dig up the top layer, then install a geotextile mat that prevents contaminated dust from rising upwards. Finally, they then place six inches of clean soil and new sod on top of it.

On the rest of the site, the construction of buildings and walkways will also serve to contain the dust, officials said.

Many of the parents in the room, however, voiced concerns that the entire site has not been tested for lead, and that the most extensive remediation techniques will only be on the playground site.

Dr. Felicia Rabito of Tulane University’s School of Public Health and Tropical Medicine, speaking from the audience, said the treatment proposed for the playground is appropriate, but the rest of the site should be tested before it’s assumed that buildings and walkways are sufficient protection.

“What Dr. Lo has proposed for the contaminated site is state of the art. No worries,” Rabito said. “A reasonable concern is to test the rest of the site. If my children were going to be on the site, I would want to know.”

The meeting grew contentious at several points. Audience members disputed the necessity of renovating the Broadway campus immediately, and accused the Rev. Cornelius Tilton, chair of Audubon’s governing board, of failing to explain why the entire site was not tested. A handful of others defended the school officials, praising their work on behalf of the school and urging against criticism of that could derail the project.

Common ground was found on one point: Tilton proposed releasing a more complete site plan to parents, so they will have a better idea how much of the lot will be covered with buildings and walkways. He and school board president Lourdes Moran also said they would look into more options for containing lead dust on the rest of the site, continued monitoring of the site after the remediation and making lead testing more accessible for Audubon students.

“Can we monitor? That’s not a request that’s out of the realm,” Moran said. “We hear you. We hear you loud and clear.”

After the meeting, Melissa Pinero said she has already decided to move her second-grader to Ecole Bilingue, a private school, so he can continue his French curriculum away from the threat of lead, but the experience with the Audubon temporary campus prompted her and other parents to form an advocacy group called New Orleans Opposes Lead Anywhere that will continue pushing for the full remediation of the entire site.

“The only thing I gleaned was Dr. Lo said his recommendations have not been finalized,” Pinero said. “It makes me think that, potentially, he will recommend complete remediation of the site.”

Micaiah Bethune, who has a fifth grader and a kindergartner, grew progressively more cynical as the meeting proceeded. He said he, too, would like to move his children to another French program, either Ecole Bilingue or the new Lycee Francais of New Orleans, a public charter school.

“If we can possibly get in, that’s the plan,” Bethune said. “It’s just funny that they would announce it three weeks after all the school registration is closed for the city, so you’re locked in for a year while you try to find something.”

Parent Shanda Quintal, however, said she is still assessing the lead situation and holds out hope that an acceptable solution will be found.

“I hope they take a stronger stance on protecting the kids,” said parent Shanda Quintal. “‘Good enough’ is not good enough. It’s got to be the best that we can do.”

To read our live coverage of Thursday’s meeting in its entirety, click “Replay” in the box below.

15 thoughts on “Audubon Charter site has “highest lead I’ve ever seen” in city, scientist says, but promises it can be contained”