Police interview a woman about a shooting on Louisiana Avenue Parkway on March 18. The suspect in that shooting, Jeremy Williams, may be tied to a number of shootings over the last month, police said this week. (Sabree Hill, UptownMessenger.com)

The father of a toddler gunned down in a shootout after a Central City second-line last fall is now wanted in connection to a shooting that wounded a woman earlier this month, and police say he may have been involved in a spree of recent Uptown shootings from Gert Town to River Garden.

Jeremy “Noonie Man” Williams, 21, is wanted on a warrant as a principal to attempted second degree murder in a March 18 shooting near Louisiana Avenue Parkway and South Broad, police said Thursday. Two women were walking on the sidewalk about 7:30 p.m., when someone in a black vehicle on the street began firing in their direction, said Sgt. Sandra Contreras of the NOPD Sixth District persons-crime unit.

Matthew B. Bell (via opcso.org)

One of the women was shot in the back, but witnesses were able to give a strong enough description of the shooters that police were able to identify them, Contreras said. Police also identified 19-year-old Matthew Bell in that case, and he was arrested Wednesday, but Williams remains at large, said Detective Kristen Krzemieniecki.

Williams’ name has surfaced in a number of other shooting cases over the last week, police said.

Shortly before 9 a.m. Friday, March 25, a man standing on his front porch in the 3800 block of Magnolia in the Freret neighborhood was wounded by gunfire that witnesses said came from a passing white PT Cruiser with a temporary plates that fled toward Central City. Williams is a suspect in that case, said Shaun Ferguson of the NOPD Second District persons-crime unit.

The following evening, around 9 p.m. Saturday, three people were wounded in a shootout in the 2000 block of Second Street. The victims, two men and a woman, were standing outside when two men emerged from a side alley and immediately opened fire, leaving all three victims with various gunshot wounds, Krzemieniecki said.

Around 4:30 p.m. Monday, another shooting took place near the intersection of LaSalle Street and Washington Avenue, after which two men showed up at the hospital seeking treatment for gunshot wounds to their legs, Krzemieniecki said. Witnesses told police that a white Chevrolet HRR – which bears a strong resemblance to a PT Cruiser – was also involved in that shooting, Krzemieniecki said.

Williams may have been the intended target in the Second Street shooting, Krzemieniecki said. Investigators have been told he was in the block the day before, though it is not a place he normally frequented and police are unsure whether he was actually there at the time of the shooting. In fact, it is not clear that any of the victims of the recent shootings were actually their shooters’ targets; instead, the victims may be passers-by or cases of mistaken identity, Krzemieniecki said.

It is also possible that the shooting on LaSalle was in retaliation for the Second Street shooting, Krzemieniecki said. Williams is also a suspect in a shootings in late February at Olive and Short streets in Gert Town, Ferguson said, and in the River Garden development on Lundi Gras, Krzemieniecki said.
.
“His name has been coming up all of a sudden for almost everything,” Krzemieniecki said.

Williams’ 2-year-old son, Jeremy Galmon, was gunned down in crossfire between two feuding groups in Central City after a second-line parade passed in early October. Investigators have not yet found any connection between that case and the recent shootings, Krzemieniecki said.

“We don’t know if this is retaliation for his son’s death. The people responsible for that are still in jail,” Krzemieniecki said. Williams is a member of a loose-knit group known as the Calliope Young Goonies (in reference to the old B.W. Cooper Apartments), and the shootings are more likely tied to ongoing animosity between them and other neighborhood gangs, Krzemieniecki said. 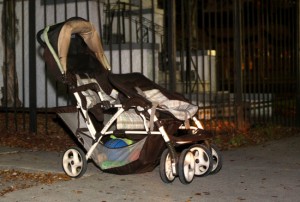 A double stroller remains on the side of Louisiana Avenue Parkway where it was left after the March 18 shooting. (Sabree Hill, UptownMessenger.com)

One thought on “NOPD: Father of slain toddler now suspect in recent shootings”