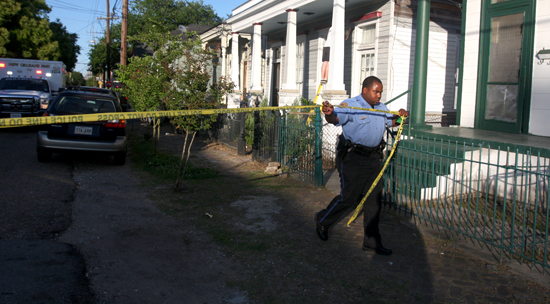 An officer wraps crime scene tape around the Chippewa Street location of one of three shootings in the Irish Channel on Saturday.

Arrests made in a sprawling weekend gun battle and police assurances that their investigations into the violence remain active brought little comfort Wednesday night to Irish Channel residents, who say the sound of gunfire still occurs all too frequently in their neighborhood.

A group of teenagers got into an argument at Clay Square on Third Street, and one teen drew a gun, fired several shots, and then hid the gun under a trash can as the crowd dispersed, said Lt. Troy Savage of the NOPD Sixth District investigative unit. A caller from the neighborhood gave police the exact location of the gun and the person who had it, and he was quickly arrested and the gun found, Savage said.

Shortly afterward, the same feud moved up a block to Fourth and Annunciation, where shots again rang out. Again, no one was injured, though a woman dropped a baby she was holding as the bullets flew around her, Savage said. Neighborhood anger over the incident again resulted in a tip that led to the shooter, another juvenile, and he was arrested and his gun recovered, Savage said. Though authorities are required to withhold his name because of his age, Savage said the teen has such an extensive criminal history specifically in the Irish Channel that the judge gave him a $50,000 bond to keep him in jail.

The final shooting, on Sixth and Chippewa, was also related to the prior two, with participants from the earlier shootouts still involved. That shooting left a man with a gunshot wound to the buttocks, and it appears from the angle of the wound that the bullet may have ricocheted off the sidewalk or another surface before striking him, Savage said. No arrest has been made in that case, though investigators are still working it, Savage said.

The shootings follow the general pattern of violence in the Sixth District and across the city — a very small group of idle, well-armed teenagers who use gunfire to settle even the most trivial of disputes.

“It can be hard to comprehend,” Savage said. “You think it’s so silly and so trifling, but it sets people off.”

All of the people involved are repeat offenders well known to investigators, said Commander Jeff Walls, who was promoted out of the Sixth District to head the crime lab two weeks ago, but returned Wednesday night to fill in for Commander Bob Bardy at the community meeting.

“All the arrests are names we’ve talked about previously,” Walls said. “We know who these individuals are. We’re using any tools we can to keep the individuals in jail who are career criminals.

Further, Walls said, the Sixth District is seeing far lower numbers of shootings than in years past.

A map of the week’s crimes on the wall showed the Chippewa Street shooting, but not the other two incidents that had no victims. That discrepancy troubled many of the 20 or so Irish Channel residents who attended the meeting, who asked repeatedly for more attention to all the gunplay in the neighborhood.

“It’s not a shooting unless someone gets shot, right?” asked resident Johnston Smith. “Well, we’ve got thousands of ‘firings.’ ”

Walls and Savage said they track every incident of gunfire, and promised a full accounting of the numbers of reported incidents in the Irish Channel to resident Andrew Oliver. Meanwhile, they encouraged residents to continue calling police when they hear trouble in the streets.

“You just have to keep calling until we get it right,” Savage said. “What I’m getting is that there’s a perception out there that there’s a giant problem, and we want to fix that for you.”

But some residents questioned how deep into the ranks that dedication extends, complaining that police took 10 or 15 minutes to show up to one of Saturday’s gunfire incidents, and were uninterested in talking to witnesses or even getting out of their patrol cars once they did arrive. Walls called that behavior “an embarrassment to the district,” and said it was being addressed by the new integrity control officer, Capt. Rose Duryea.

For the residents, the arrests and the explanations did little to blunt the fear that more shootings — literally out their front doors — are imminent. One woman said she was considering buying a gun for the first time in her life, describing a feeling of “helplessness” in her own home.

“We’ve all had that feeling,” said Ed McGinnis, a former president of the Irish Channel Neighborhood Association. “It is my opinion that there’s a group of about 8 to 12 kids, and we all know who they are, though we don’t know their names. But solving this is is not just throwing these kids in jail.”

State Rep. Walt Leger, an Irish Channel resident, said that part of the problem is a “broken juvenile justice system” that makes it impossible to get treatment for teenage repeat offenders, and that his attempts to reform the system based on more successful models in other states have thus far been stymied by an uninterested Jindal administration. In the meantime, McGinnis encouraged the other residents to get more involved in recreation efforts in the neighborhood.