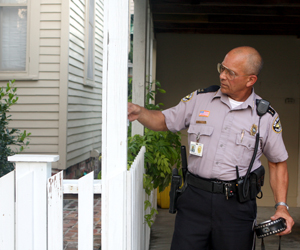 An officer with New Orleans Private Patrol chased a coyote through the stately streets surrounding Audubon Park last weekend, prompting a warning to area residents to watch their pets.

Capt. James Baldassaro was called to a home on Garfield Street near State last Friday for a sighting of coyote on the loose. While he was writing the report, he said, the coyote emerged from a side yard and began loping down the street. He followed it until it reached Camp Street headed toward Jefferson reaching the outer boundaries of the neighborhoods patrolled by New Orleans Private Patrol.

Baldassaro said he contacted the New Orleans Police Department and a private wildlife removal company, but has not heard since Friday whether the animal found or seen again. He also contacted Audubon Zoo, thinking it might have escaped from there, but was told they had no coyotes. He has heard reports of coyotes slinking along the Mississippi River down by the Fly, he said, and speculated that it might have come to Uptown from there.

Baldassaro’s experience prompted Louis Gurvitch of New Orleans Private Patrol to email neighborhood residents with the warning that “a coyote has no qualms about killing a cat or a dog and can probably take on all but the largest canine breeds (say, German Shepherds and larger).”

Baldassaro initially thought the call was a practical joke, revenge for an April Fool’s prank he played on another officer, for whom Baldassaro left a phone message from a “Mr. Lions” with the the zoo’s number. Speaking during a break in his patrol of the same neighborhood on Monday, Baldassaro said he regrets not taking a picture of the unusual intruder into the neighborhood.

One thought on “Coyote eludes capture in Hurstville neighborhood”