A plan to divvy most of the Carrollton, Audubon and university neighborhoods among three Jefferson Parish and Lakeview-based districts in the state House of Representatives narrowly failed Tuesday, leaving all of Uptown represented by three New Orleans-based lawmakers.

State Reps. Helena Moreno, Walt Leger and Neil Abramson led the attack on the Jefferson Parish plan, describing it as Jefferson Parish’s blatant attempt to gain more seats without regard for the will of voters or the integrity of neighborhoods in New Orleans.

“This is just slicing and dicing New Orleans up,” Abramson said. “This plan from Jefferson Parish is their attempt to get them 100 percent whole at the expense of New Orleans.”

The plan the trio of lawmakers were defending divides most of Uptown between Abramson on the west and Leger on the east, with Moreno’s downtown-based district reaching into the Garden District area. By contrast, state Rep. Tony Ligi of Metairie had proposed a plan that would have based the Carrollton and Audubon areas in two Jefferson-based districts, and the university areas of Uptown in a Lakeview district, preventing state Reps. John Labruzzo of Metairie and Nick Lorusso of Lakeview from having to run against one another. 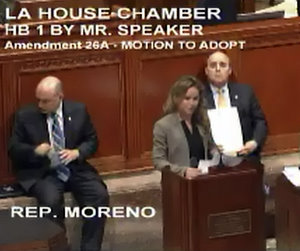 State Rep. Helena Moreno said it appeared the lines that drew her and Walt Leger into the same district were done intentionally.

Moreno spoke first against the Ligi plan, arguing that it places incumbent lawmakers over neighborhoods and criticizing the sprawling shapes of the New Orleans districts in the plan.

Leger, who would have been pitted against Moreno under the Ligi plan, said that the long vertical districts proposed by Jefferon lawmakers split up key centers of African-American voting strength like Hollygrove and Gert Town.

“They have formerly been the core of a minority district, but they are split, cracked, fractured into three different districts,” Leger said of the neighborhoods. “What is the motivation for that? It is to lessen their voice. It is clear they have been placed into strong majority-white districts in order that that population does not have a voice in this process.”

Moreno, Leger and Abramson were joined in the nearly two-hour floor battle (which is available for live streaming via the House of Representatives website) by several of their colleagues from New Orleans. Newly elected state Rep. Wesley Bishop said the Jefferson plan did not “pass the smell test,” while state Rep. Charmaine Marchand Stiaes said the U.S. Department of Justice would reject the entire map if the districts drawn by Ligi were included.

“You want to come back in July?” Stiaes said. “You let this amendment get on. This is gerrymandering at its best.”

Jefferson lawmakers behind the amendment brushed off allegations that it was unfair.

“Communities of interest have been broken apart in all our state,” said state Rep. Cameron Henry to Moreno.

“Every one of us has communities that don’t necessarily match another one,” argued Rep. Joseph Lopinto. “Our districts change. We’re gonna have areas that aren’t necessarily the same.”

At one point, Henry suggested that the Orleans-Jefferson disagreement could have been ironed out at a meeting planned by the two delegations several weeks ago that most of the Orleans members other than Leger missed. That contention drew fiery responses from Abramson, Moreno and Leger, who argued one single meeting would have made no difference.

“I think it’s ridiculous you would bring up a meeting two weeks ago that some of the members of my delegation couldn’t attend to suggest that it’s appropriate to slice up the city of New Orleans – as if it’s their fault,” Leger said.

Ligi offered a different view of his amendment, suggesting that dividing the city of New Orleans up between more districts would give it greater, not less, representation.

“New Orleans, in my view, actually benefits from my plan because they will have two more people in their delegation,” Ligi said. “Those folks are going to fight for New Orleans issues.”

The Ligi plan failed by a vote of 47-49, according to the House journal. Among those voting against it were Abramson, Austin Badon, Bishop, Jared Brossett, Walker Hines, Juan LaFonta, Moreno and Stiaes. Those who voted for it included Henry, LaBruzzo, Lopinto and Lorusso. Speaker Jim Tucker, whose original plan closely mirrored that of the New Orleans delegation, did not vote.

Several of Tuesday’s speakers, including State Rep. Rick Gallot of Ruston, recalled a packed meeting at Dillard University in which representatives of numerous New Orleans neighborhoods (including Carrollton and Irish Channel) begged that neighborhood boundaries be respected. Gallot also pointed out that one of the speakers was a Lakeview resident who suggested similarities between that neighborhood and Metairie might make a good district – the very same idea that prompted the ultimately unsuccessful Ligi amendment.

"This is wrong," criticizes state Rep. Neil Abramson. "If you look at this map, you have four districts that meet at my house."