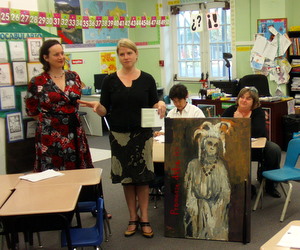 During Wednesday's ISL meeting, Carrie Fox (left) and Nicole Hernandez (center) show off a painting by Tony Mose, created for sale at the school's upcoming "Refrigerator Art Auction and Gala." The annual fundraiser will be from 6 to 9 p.m. Sunday, April 3, at The Foundry on St. Joseph Street, and tickets begin at $60.

The International School of Louisiana is expecting a record number of returning students next year as it continues plans for its Algiers expansion and possible pre-kindergarten addition – even as state officials encourage the school to accept more at-risk and special-education students, administrators said.

Though the numbers are still settling out, next year’s enrollment should be around 550 students in the current ISL building and roughly 72 on the Westbank, ISL head of school Sean Wilson told the school board at a Wednesday night meeting. That essentially fills the Camp Street building to capacity, even after several administrative offices move to the Westbank campus, Wilson said.

“I really think a lot of it has to do with parents having confidence in what’s happening academically,” Wilson said in explanation for the high numbers.

The lease on the proposed Holy Name of Mary school site in Algiers continues to be subject of negotiations between attorneys for ISL and the Archdiocese of New Orleans, he reported.  ISL attorney Justin Schmidt of Adams and Reese is seeking a lower rental rate that will account for some of the cost of the renovations that will be needed, and discussions on that point are continuing this week, Wilson said.

As long as that issue is resolved by June, the school will still have enough time to return the Holy Name of Mary campus to operation before the start of school in August, Wilson said.

ISL’s application to the state for a grant that would allow it to create a pre-kindergarten program for 4-year-olds was submitted at the beginning of the month, and administrators are now waiting on its results, Wilson said. If accepted, the school would have to open the pre-kindergarten by September, though a separate grant to create a full-immersion program for foreign languages in the pre-K classes could begin later in the year.

As the school’s expansion plans proceed, Wilson said he met Wednesday with two representatives from the Louisiana Department of Education Office of Parental Choice who expressed several concerns all broadly related to the school’s accessibility:

No specific action was recommended on these topics, and board members limited their questions to simple points of clarification as Wilson spoke. Instead, board president Grant Ligon deferred the issues to a four-hour “retreat” and workshop the board is holding at 9 a.m. Saturday at the ISL campus, 1400 Camp St. That meeting is open to the public.

Meeting records online | The ISL board voted Wednesday night to begin posting their meeting minutes, Wilson’s reports and the committee reports online at the school’s website each month after they have been approved. “I think it’s important to be as transparent as possible,” said board member Charlie Hadley.

New board member | David Napoleon, a New Orleans attorney and member of the Warren Easton Charter High School board, was accepted onto the ISL board Wednesday night and participated in his first meeting.

New ISL board member David Napoleon (center) is flanked by Charlie Hadley (left) and Andrew Yon (right) as they listen to a report from school officials. (Robert Morris, UptownMessenger.com)