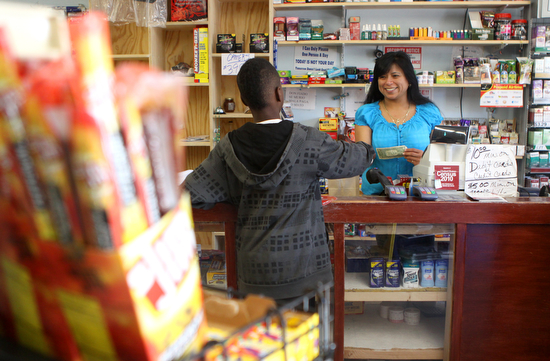 A Freret Street corner store will request the city’s permission this week to begin selling alcohol, drawing reactions that vary widely from sympathetic support and to outright opposition from its neighbors.

The owners of the building that houses SuperMercado Las Acacias at the corner of Robert and Freret Street are scheduled to appear before the City Planning Commission on Tuesday afternoon to request a conditional use for alcohol sales, a necessary step before obtaining an actual liquor license. Shoppers want to be able to buy alcoholic drinks, said store owner Alba Xiomara last week, and the store’s early participation in the Freret commercial corridor’s resurgence should earn it the right to fulfill its customers’ wishes, she said. 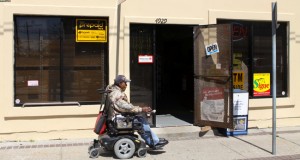 John Tillman, who lives on Valence St., rides his wheelchair to Super Mercado Las Acacias on March 11, 2011. Tillman said he goes to the store almost everyday and that if he had to cross Claiborne to go to other similar stores it would be dangerous for him. "We need a store here," said Tillman. (Sabree Hill, UptownMessenger.com)

Further, the store would carry only beer and wine, Xiomara said, and she has signatures from hundreds of customers who support alcohol sales at the business.

“This is something needed for the kind of neighborhood that is here now,” Xiomara said. “I have been here three years, and I was the only thing that was here. I brought a lot of traffic to Freret Street – a lot of people have come here because of me.”

The Freret Business and Property Owner Association, however, plans to oppose the change on Tuesday, said board member Kellie Grengs. Problems with a previous convenience store in the same location still haunt some business owners’ memories, Grengs said, but more important is a desire to maintain the property uses laid out in the Freret Arts and Cultural Overlay District passed in late 2007.

“It’s going to look like we have egg on our faces if we allow spot zoning, as if we knew exactly what we wanted two years ago, and now we’re flip-flopping,” Grengs said. “I’m not sure how a new package store promotes arts and cultural uses.”

Grengs asked for association members’ opinions by email, and got a wide range of opinions in response – all of which she said she forwarded to the planning commission. A number of members said they were strongly opposed to allowing packaged-liquor sales at the store, for some of the following reasons:

Other members argued for allowing limited alcohol sales, based on various reasons and conditions:

Xiomara responded with her own letter, describing the series of businesses on Freret that relied on her store for supplies while they got started. The store has no current issues with trash or loiterers, she writes, and keeps hours consistent with a grocery store.

“What we do is within business practices as other vendors on Freret Street. We will not allow our standard to go down. We can and will only improve,” she writes. “We’re an independent store like the rest of the vendors on Freret. We have products that you all see each day in other stores and advertised on TV like Lays Chip, Borden Milk, Bunny Bread, Coke, Pepsi, and products for the Latino neighbors that helped re-build the Freret Corridor. Selling alcohol beverages as any other convenience store or cocktail bar will help the area and not take away.”

The City Planning Commission meets at 1:30 p.m. Tuesday in the City Council Chambers at City Hall, 1300 Perdido Street. Las Acacias is the first item on the agenda, which actually includes a total of three Uptown requests:

The Freret Business and Property Owner Association has its quarterly meeting scheduled for 5:15 p.m. Monday at the Next Level Institute, 4700 Freret St, but Las Acacias is not on the agenda.