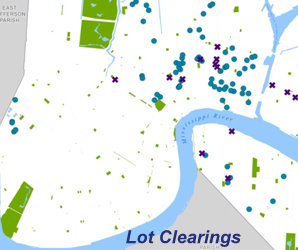 This map shows lot clearings conducted by the city in January. None were conducted in Uptown New Orleans because of a dispute with the contractor, though officials said Thursday that the new contract is "imminent."

The city’s return to clearing vacant lots in Uptown New Orleans is “imminent,” as officials work out the final details of the contract this week, they said Thursday.

The city’s program to keep abandoned lots clear of debris and mowed has been on hold since the Nagin adminstration ran into a legal dispute with the former contractor in Council District B, which runs from the Central Business District to near Audubon, and in District E in New Orleans East.

That contract has now been rebid, and a new contractor has been selected, said Jeff Hebert, who spearheads the city’s anti-blight efforts. Insurance issues are all that remain to be settled in the contract, and that topic is being actively negotiated this week, Hebert said at Thursday’s Blightstat meeting of city officials.

“As soon as that is worked out, the mayor can sign the contract and we can move forward,” Hebert said.

City officials – including Hebert, Deputy Mayor Andy Kopplin, and numerous department heads – meet every two weeks for the BlightStat meetings, as they discuss strategies to meet the city’s goal of remediating 10,000 derelict properties in three years. The city has set benchmarks for numerous components in the fight against blight, and noted marked progress in some Thursday and substantial work to be done in others.

The number of FEMA trailers left in the city has fallen from 230 in December to 168 as of this week. The city has declared the trailers a zoning violation, and hearings on 51 sites will be held March 28. Meanwhile, FEMA will begin charging rental fees for any trailers still out beginning May 1, suggesting that the vast majority could be gone in the coming months.

Code-enforcement inspections were another source of some success Thursday. The city’s goal is to conduct 1,200 inspections every two weeks, and has met or nearly met that benchmark in three of the four BlightStat meetings held so far this year. In the last two weeks, the inspection backlog fell from 882 to 735, and the number of inspection requests older than 90 days was cut the most deeply, about 30 percent.

Another element of the anti-blight strategy is to sell properties with excessive unpaid fines through sheriff’s auctions, and the city’s law department has seen a dramatic uptick in the number of properties scheduled for sale. The process is costly, however, so the city tries to choose the properties most likely to actually be bought at a price that will cover expenses, Hebert said.

“We need to have properties that will sell in order to make this work,” Hebert said. “This isn’t a free process for the city. This is arduous.”

The sheriff’s sale can be an elusive goal, however, law officials warned. Even once a sale is scheduled, new information received can result in a sale being canceled at the last minute.

One area where the city has yet to meet its targets are in code-enforcement hearings, officials said. The city’s goal is to average 450 hearings every two weeks, but has yet to even reach 350, and the last period totaled only 178 because of the holidays. The city is making strides, however, in bringing the hearings it conducts to actual guilty judgments instead of indefinite postponements, officials said.

Perhaps the greatest difficulty has been in achieving actual demolitions of derelict properties. The most recent two-week period showed only three demolitions, and even gains the city thought it had made in previous periods were reduced after discovering that it had counted about 10 demolitions twice.

“The quality of the numbers isn’t great, and what they’re showing is not very good either,” observed Oliver Wise, the city’s performance director, who runs the BlightStat meetings. “What really matters is getting the numbers up. That’s what people care about.”

Officials touted one major demolition property underway in the 14100 block of Kern in New Orleans East, a five-acre vacant apartment complex that will be reduced to a concrete slab. Kopplin said that overall, the intense scrutiny of the BlightStat meetings continues to improve the system, and that the number of demolitions will improve soon.

“Every time we come back here, we find another problem that needs to be solved. Sooner or later, we’re going to run out of them,” Kopplin said. “The processes are improving. We’ve gotten a lot smarter about how we do our work.”

The meetings are open to the public, and about two dozen community leaders attended Thursday.