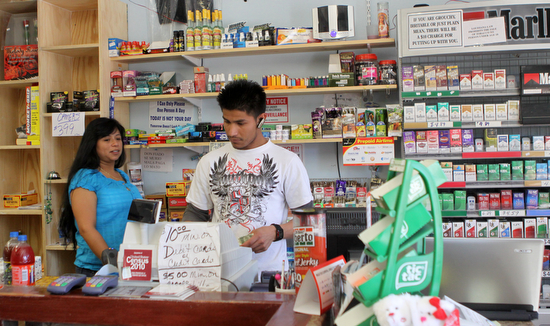 Alba Xiomara and Rolando Zelaya work at at Supermercado Las Acacias on Friday, March 11. The Planning Commission gave Las Acacias its approval to begin selling alcohol Tuesday, though that decision must next be ratified by the City Council. (Sabree Hill, UptownMessenger.com)

Both a long-stalled gourmet burger restaurant planned for the corner of Jackson Avenue and Magazine Street and a Freret Street corner store’s request begin selling alcohol received initial approval from the City Planning Commission today, but a decision on a proposed film-studio space on Constance Street was deferred for a month.

(Note: See the end of this article for a recap of our live coverage of the debate on each issue.)

Charcoal’s Gourmet Burger Bar is a proposed two-story hamburger restaurant with diner-style counter service on the ground floor and full table service upstairs designed by the owners of Somethin’ Else cafe in the French Quarter, said architect Kimberly Finney. The project was originally proposed several years ago, but troubles with the contractor stalled the project until its permission from the city to build expired.

Charcoal’s requires a conditional use to build on the Magazine Street site because its two-story floor plan is larger than the 5,000 square feet normally allowed by its zoning. It has six on-site parking spaces, and will also require a waiver for the other 10 spaces that its size would technically require. Finney said that she did not anticipate parking to be a major hurdle because the area, especially during dinner hours, has a substantial amount of on-street parking available.

The application received votes in favor from all but one commissioner, Craig Mitchell. Charcoal’s has signed a good-neighbor agreement with the neighboring Irish Channel and Garden District neighborhood associations, but that agreement was not included in the materials compiled by the planning staff. Mitchell said his vote was merely to signify his frustration with the incomplete information.

“I don’t know what I’m signing off on,” Mitchell said. “It (the no vote) was more principle than anything.”

Charcoal’s lot is very near where Vera Smith died during Hurricane Katrina, and the memorial marking the former site of her makeshift grave will be reconfigured by artist Simon Haldeveld once construction begins in the next several weeks.

Supermercado Las Acacias, a corner store on the Freret commercial corridor, was granted unanimous approval by the planning commission for its request to begin selling alcohol.

The hearing featured a number of Freret business owners speaking against the liquor sales, saying packaged alcohol would contribute to litter and loitering, and a number of neighborhood residents praising the store’s owners and the convenience of having it in the neighborhood.

Several speakers on both sides of the issue saw a sticking point in the fact that the conditional-use permit for alcohol sales will remain with the building even if the tenant changes. Specifically, while many neighborhood leaders praised Las Acacias, they said they distrust property owner Cai T. Le because of problems they said were associated with the management of a pre-Katrina store on the property. Le did not attend the hearing.

Commissioner Louis Volz suggested that in some “rare” cases, the city has been able to tie a conditional use permit to one business operator, rather than the property itself, but the city planning staff said any action like that would have to be undertaken by the City Council, not the Planning Commission.

With the permit for Las Acacias, the planning staff had recommended prohibiting any consumption on the premises and suggested a few conditions regarding hours, trash cans and signage. The eight commissioners voted unanimously in favor of the staff’s recommendation without additional discussion.

Decisions by the planning commission must be ratified by the city council before they go into effect. At a meeting of the Freret business association Monday prior to Tuesday’s hearing, board member David Lessinger suggested that a neighborhood meeting prior to the City Council ruling might help reach a better resolution to the Las Acacias issue.

“There’s a lot of questions about what can you sell, what can’t you sell, who does the permit get attached to, and I think it would be useful to get all those questions straightened out,” said Lessinger, who is resigning from the association board and his current position with Neighborhood Housing Services to join the Landrieu administration’s blight task force. No meeting date has been set.

The property at 1517-23 Constance Street is a nearly 1-acre site a block off Magazine Street in the Lower Garden District with three buildings that together have more than 60,000 square feet of floor space. The structures originally included a cotton warehouse and box factory, but most recently were used as a warehouse by Volunteers of America until about 2000.

Though they have never been used residentially, the lots are currently have a multi-family zoning. Noting that the property is three blocks from Second Line Stages, property owner Sam Farnet (owner of Joey K’s on Magazine Street) said he wants to be able to renovate it into a project that will include studio space for the film industry, and for that requires the Mixed-Use Zoning classification MU-A.

“Other zonings don’t allow for movie studios, or the various components of what movie studios’ needs are,” Farnet explained after the meeting. “We might be building sets – light industrial.”

Frank Cole of the Coliseum Square Association urged the commission against the zoning change, saying that while the association has faith in Farnet as a developer, they are concerned that the new zoning could open the door to all sorts of undesirable uses. At the extreme, Cole pointed out that MU-A zoning technically allows chicken slaughterhouses, and said he would be more comfortable with a lighter commercial zoning.

“We just don’t think there’s any guarantee that if the production company doesn’t go forward, we won’t get stuck with one of the other permitted or conditional uses of the property,” Cole said.

In response to that concern, commissioners voted unanimously to defer the project until their April 26 meeting, giving Farnet time to meet with Coliseum Square. Farnet said afterward he believes the fact that he does not yet have a concrete commitment from a film-industry tenant is also contributing to the association’s worries. Uses like slaughterhouses are out of the question for his business interests, Farnet said, noting that he plans to meet with the association soon.

“There’s a ton of uses I would scratch off right now,” Farnet said. “Hopefully we’ll agree to agree.”

To read our live coverage from the meeting with full details on each of the above issues, click the box below.