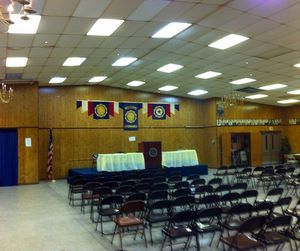 The purchase and renovation of the old American Legion building on Magazine Street will cost nearly $6 million, requiring a tenant that can pay approximately $600,000 per year for the lease, the developer eying the property for a possible Walgreens told neighborhood leaders on Friday.

Stirling Properties plans to replace the brick facade with a glass wall, preserve some of the American Legion features inside the building and add a drive-through to the 40-space parking lot in the rear. Although the commercial zoning would allow the store to stay open 24 hours and sell alcohol, current plans are to do neither, closing instead at 10 p.m., the representatives of three neighborhoods surrounding the site wrote in a letter to members Sunday evening.

The neighborhood leaders recommended the developer call a meeting with the public to discuss the project, the letter says, but no date has been announced.

Read the full letter below:

You may know that a prospective developer of the Magazine Street American Legion site asked to meet with representatives of Hurstville, Upper Hurtsville, and ARNA to discuss a possible development on the site. The development is very preliminary at this point, and the meeting was for the sole purpose of providing information to the neighborhood associations early on in the process. Most of us have concerns about this project, but we think it’s a good sign that the developer wants to involve the neighborhood.

The large volume of input we each received from neighbors was extremely helpful to us in this meeting, and enabled us to ask better questions and express potential concerns to the developer.

The ARNA, Hurtsville, and Upper Hurtsville association representatives have jointly compiled some notes from the meeting that may be helpful in understanding more about this project. These notes follow this, and we have attached photos of the interior of the Legion Hall.

We will provide more information to our members as soon as it’s available, and expect there will be some forum or forums to ask questions of the developer, express our concerns, etc., in the near future as this develops.

Because Walgreen’s has not committed to lease the property, the following additional facts are based on Stirling experience with other Walgreen’s properties and discussion with Walgreen’s about this property:

The neighborhoods represented suggested to Stirling that they plan an open neighborhood meeting for all interested parties to listen to concerns.