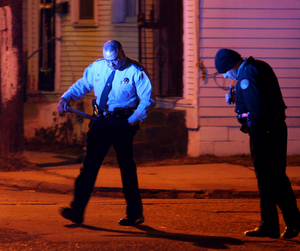 Police look for shell casings near the scene of a shooting at La Salle and Soniat streets Sunday evening. (Sabree Hill, UptownMessenger.com)

The man killed in a shooting Sunday night on LaSalle Street was awaiting trial for possession of guns and drugs in a house nearby, police said, prompting residents trying to revitalize the Freret neighborhood to re-examine their options to deal with problematic properties.

Donald Brown, 22, was standing near the intersection of LaSalle and Soniat streets about 11 p.m. when he was shot, and he later died at the hospital, Lt. Mike Montalbano told a group of concerned Uptown residents Tuesday evening at the NOPD Second District’s monthly community meeting.

In November, narcotics officers had searched Brown’s residence in the 2200 block of Soniat and found marijuana and two guns, one stolen and one with its serial number obliterated, Montalbano said. Brown had actually been to court last week for a hearing on the charges, and the judge had ruled there was probable cause for each of them, Montalbano said.

That pattern of repeated drug crime and violence at individual addresses drew a strong reaction Monday night from a handful of Freret neighborhood residents, who put their Valentine’s evening plans on hold to gather and explore action that united community members can take against such “problem properties.” The underlying problem, said business owner and resident Greg Ensslen, is less the individual tenants and more the landlords who rent to them.

“There’s a lot of people that would like to see this kind of problem solved,” Ensslen said. “For us, it’s very acute because we still have the ringing in our ears from last night.”

The core of the problem, neighbors said, is private property owners looking to make easy money on their rentals without any regard for what takes place at the buildings they own. Most often, said City Councilwoman Stacy Head, this is not subsidized housing, because of the extensive background checks that go into those programs.

“Most of the high-quality subsidized housing in the city, you don’t know they are. They’re just nice people,” Head said. “It is the people rejected by those programs that are the problem. They can’t get subsidized housing because they’re criminals.”

In fact, if the housing was subsidized, it would be easier to deal with the owners, Ensslen noted. The agencies would likely be more responsive to code violations than the city as a whole.

“HANO has very specific rules about properties they want to put their clients in,” Ensslen said. “Their clients are people in our community that we want to take care of.”

Justin Harrison, a New Jersey attorney who recently relocated to the Freret neighborhood, said his research suggested that the state’s public-nuisance laws could be useful in dealing with problem properties. In essence, the laws (tightened in 2008 by state Reps. Neil Abramson and Nick Lorusso) say that repeated instances of drug crimes or violence at a property within a specific time frame constitute “maintenance of a nuisance,” the result of which can be a court order shutting down the property for five years.

A landlord has “an obligation as a commercial property owner to see to it that conditions don’t exist on his property that violate Louisiana’s fairly strict morality laws,” Harrison said. By recording repeated violations, “you create a presumption that the landlord is essentially condoning this behavior.”

The district attorney can and should be the one to initiate these suits, Head said. If he fails to act on the request, however, a group of seven people in the same voting precinct can petition a judge to take action against a nuisance.

“We need to make it miserable to own a slum in this neighborhood,” Head said.

In addition to the courts, a more immediate suggestion came from Freret gallery owner Andy Brott: Install inexpensive, inconspicuous digital video-surveillance cameras, which give police a solid basis for any criminal investigation.

“The police will instantly show up if you hand them the footage,” Brott said.

The Freret business corridor is already well known to investigators for its proliferation of private cameras, which police said were crucial to the quick identification of a suspect in January’s fatal shooting on Freret Street. That type of extensive, proactive approach will be necessary with any public agency in the city if change is to come, Ensslen said: the neighbors must do the work for the city.

“Just reporting something doesn’t get it done,” Ensslen said. “It never did in New Orleans, and it certainly doesn’t now that we’re broke.”

To read a recap of our live coverage of the NOPD Second District community meeting Tuesday night, click in the box below.