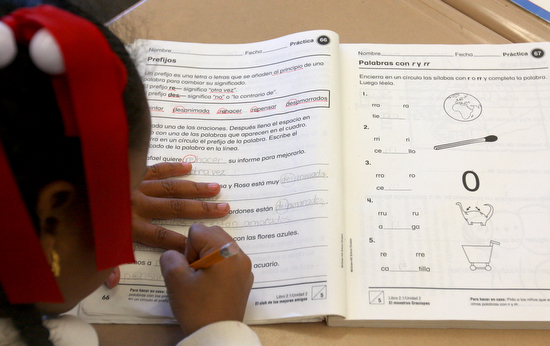 A second-grade student circles answers in a Spanish-language workbook in a full-immersion class at the The International School of Louisiana in January. (Sabree Hill, UptownMessenger.com)

The International School of Louisiana is hoping to launch a pre-kindergarten program that could begin accepting 4-year-olds as early as next year at its new West Bank campus, school officials said Wednesday night.

The school is applying for two state grants that would create the program, but they are both highly competitive and by no means certain, head of school Sean Wilson said at the Feburary meeting of the charter school’s governing board.

One program, officially known as the Cecil J. Picard LA 4 Early Childhood Program, is intended to expand pre-kindergarten opportunities to students eligible for free or reduced lunches. It would provide the school with about $4,500 per student – about equal to the basic cost of educating them, Wilson said.

If the LA4 grant is large enough to support several dozen students, that will be enough money to begin creating a new curriculum for 4-year-olds, said Pamela Stewart, director of institutional advancement. The state would also allow ISL to accept tuition paying students alongside those supported by the grant, and together they would form a core student body familiar with foreign-language instruction prior to entering ISL’s full-immersion 5-year-old kindergarten classes, Stewart said.

“We’ve wanted a pre-K4 program for a long time,” Stewart said. “We know that a strong pre-kindergarten foundation leads to increased success through elementary, middle and high school. It’s one of the early indicators of academic success.”

The second grant program, the LA Renaissance Immersion Program, is intended to expand language-immersion classes across the state, Wilson said. School officials hope that grant will help cover the additional costs of language-immersion materials in pre-kindergarten that the more general LA4 grant does not anticipate, Stewart explained.

The deadline for the school to apply for the LA 4 program is March 4. Stewart said the program does not provide the criteria on which schools will be judged, so neither she nor Wilson was willing to speculate about ISL’s chances of being awarded it. And while they focus on writing the grants, they have not yet begun working out how the first class would be assembled.

“If funds are awarded, the programs could start operations as soon as August 2011,” Stewart wrote in an email. “An application process and time line would be determined upon notice of a grant award.”

Meanwhile, negotiations are continuing with the Archdiocese of New Orleans over the Holy Name of Mary school site in Algiers, Wilson said. ISL’s attorneys are reviewing the latest draft of the lease, and they hope to have it finalized by March 15.