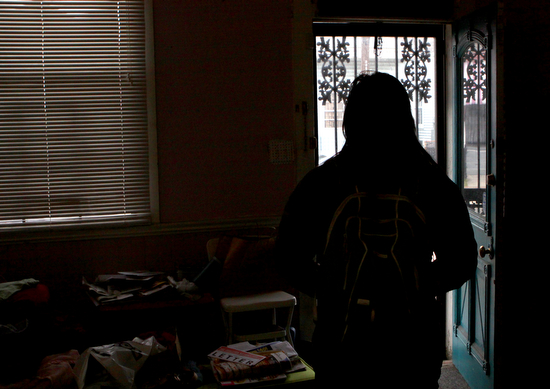 Liz Money stands in the doorway of her home Thursday, where her belongings are still in disarray. After living though a home-invasion Sunday, Liz stopped staying at the house, and it was broken into again on Thursday. (Sabree Hill, UptownMessenger.com)

On the floor of her shotgun home, her hands bound with a pair of her tights and a sweater wrapped around her head as a blindfold, the sassy, self-described computer geek known to much of New Orleans as “Liz Money” tried to keep calm and avoid making any sound that might aggravate the man ransacking her house, her mind teeming with rapid-fire questions as she struggled to figure out how to stay alive.

After turning her house and her life upside down in a search for a safe that she never had, the man left without harming her. But in the week since that traumatic evening, another home has been invaded under nearly identical circumstances, her own home has been broken into yet again, and the mystery has only deepened as to why she has become a target in what New Orleans police are calling someone else’s drug vendetta.

“Liz Money” is a joking nickname the victim received back in her early 20s (her “going-out” days, she says) that she now uses as a social-media handle with well over 1,000 followers and friends on Twitter and Facebook each. To avoid exposing her to further danger from attackers who have yet to be caught, UptownMessenger.com is referring to her in this article with that public persona rather than her real name.

Last Sunday, Jan. 31, after spending the day with friends at a sci-fi convention in downtown New Orleans, Liz was back at her home on Tchoupitoulas Street, watching television in the front room about 6 p.m. with her miniature daschund, Pixel. The dog alerted to a sound in the rear of the house, then Liz heard something fall. She got up to see.

Down the hall, at the rear of the house, she saw the silhouette of a large man in the unlit back room. Hidden in the darkness, the man spoke to Liz clearly: “I am going to kill you.” 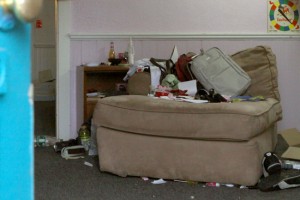 Belongings remain scattered around the room of Liz Money’s house on Thursday. The man who broke in searched through everything looking for a safe that Liz did not own. (Sabree Hill, UptownMessenger.com)

She turned away but he was already on her, throwing her face down onto the couch and covering her head with a blanket. He asked her where her safe was, but she replied that she didn’t have one. He picked her up by the arm, dragging her toward the bathroom, demanding “the cash.” She felt him tie her hands, then remove the blanket from her head and blindfold her, and finally he ordered her down onto the kitchen floor.

He asked where the safe was again, then asked about her jewelry. She said she didn’t have either. She strained her ears to hear as he went through the the house, and finally it got quiet.

“To be honest, when he said ‘Go to the bathroom,’ I was ready to die. I was ready for something really bad to happen,” Liz said afterward. “All I could think of is to keep calm and not make him madder then he was, or more angry, or not give him a reason to assault me.

“What goes through your head are what your survival instincts are,” she continued. “What should you do? What shouldn’t you do? Can you get up yet? You try to hear things, hear if he is still there, hear what he is going through, anything to know that he is out of your actual house.”

“It’s a long time to not know if you are going to live or die,” she concluded.

When she freed herself, she found her home wrecked. Every bag was emptied out, and seemingly everything that could have been shoved around had been – books on bookcases, her makeup table, her mattress, her freezer, and even the trash. Every corner of her house had been searched, but all that was taken was her wallet and a camcorder.

The following day, another home was invaded in the 2000 block of Jena Street under circumstances that bore some striking similarities. Two men knocked on the door of the house, asked the woman who answered if her fiance was there, a “Matt Palumbo,” then forced their way inside, police would later say. This time, in addition to to tying the woman up, one beat her while the other searched the house. They found the safe they were asking for, but couldn’t get it open, so they took it and left, police said.

Detectives called Liz back Tuesday, asking if she knew this Palumbo. She had never heard of him, she said. Well, he knew her, they replied, saying that neighbors had seen him around her house, that they’d heard she might be his girlfriend. She swore to them that she’d never heard of the guy.

Matthew T. Palumbo was on probation for a cocaine-possession charge, police said, so the .22-caliber rifle and the bullet-proof vests they found in his house violated the conditions of his release. They returned again to Liz’s house looking to arrest him, and she swore again that she had no idea who he was. She showed them on her computer: despite her extensive social-media network, she had no connection to Palumbo. The only possible source of confusion that she could ascertain was that Palumbo’s girlfriend, like Liz, is Asian. 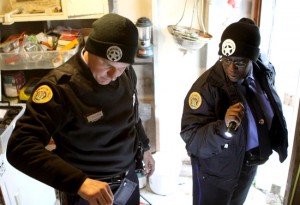 On Thursday, finally back at work at the Central Business District office where she provides technical support for a small legal-software company, Liz began getting messages from the alarm company about the new system she’d just had installed. Her home had been broken into again, so she rushed home to find Sunday’s scene repeated. The intruder had broken in through the bathroom, torn down the medicine cabinet and ransacked a few back rooms, but took nothing.

“It’s not random. I am a target,” Liz said. “I am having to deal with being a target, and a target for no reason that I know of.”

After investigating throughout the week, police cannot find a concrete reason either. After extensive background checks, they have turned up no connection between Liz and Palumbo, said Sgt. Marc Amos, head of the NOPD Second District property-crimes division.

“Our victim, I think, is a victim of circumstances,” Amos said. “The circles our bad guy runs in are nowhere near the circles she does.”

Palumbo has been known to frequent a bar near Liz’s home, Amos said, and may have even parked near her house occasionally without her noticing. Between the location of her home and her Asian ethnicity, Palumbo’s enemies may have mistaken Liz for Palumbo’s fiancee, just as some of her neighbors apparently had. Patrol officers and detectives are passing by the house frequently in case her attacker returns, Amos said.

“There is no way this girl is related, other than proximity,” Amos said.

Officers from one of NOPD Superintendent Ronal Serpas’ new task forces located Palumbo and his fiancee on Friday, with a gun and two bags of cocaine with them, Amos said. Palumbo was arrested on a slew of charges — two counts of carrying a gun with narcotics, two counts of possession of a firearm by a felon, illegal use of body armor, possession of cocaine, possession of heroin and the probation violation — and, without a plea deal, could be facing years in prison, Amos said. His fiancee was also booked on some of the possession charges, but neither is cooperating with the home-invasion investigation, Amos said.

The charges against Palumbo and his fiancee were dropped dropped in November 2011 when the district attorney declined to further pursue the cases.

The news of Palumbo’s arrest was only of slight comfort to Liz. For all the trouble he apparently caused her, his enemies are still at large, she said. With so many offers of a place to stay from friends and family, Liz has managed to avoid returning to the house she has lived in for six years.

“I can’t be there. I don’t know when I can get back,” Liz said. “The people that are breaking into my house, is that going to stop? Probably not. I didn’t get hurt this last time, but probably next time I won’t be so lucky.”

One unexpected comfort, she said, was the immediate outpouring of compassion from her wide network of friends online. After the attack was over, Liz posted a brief message to Twitter, her own disbelief at survival starkly defined in 37 simple characters: “I just lived through a home invasion.”

Twitter is occasionally described as a meritocracy, because the once you “follow” another person, you receive every message they publish. The acerbic wit and impish spirit that permeates the Liz_Money account (“i’m going out to get lunch. I may die of freezing temps on the way. That’s how good this damn BLT i’m getting is,” she wrote during a recent cold snap.) has attracted 1,700 followers, and they responded en force to her distress.

“I usually don’t put a ton of personal stuff out there, but this time it was a bit of an outlet.” Liz said. “It’s been extremely overwhelming. There’s people that I don’t even know what state they’re in, and they’re totally worried about me. It helps a lot, though I don’t know what it says about how we live now.”

By the weekend, “Liz_Money” had reclaimed some of her wit, boasting of a particularly proud shopping find (a vintage GI Joe T-shirt) and laughing about her own chronic lateness. The real Liz, too, has begun laughing and going out a bit, but she also remains deeply shaken, planning to move to a new neighborhood as soon as she can sell her house.

“It’s just frightening because I am a target,” Liz said. “They are specifically looking for my house and me.”

Editor’s note: Palumbo’s middle initial, T. (for Thomas), was added to this story on May 25, 2021, at the request of New Orleans resident Matthew A. (for August) Palumbo. The Matt Palumbo in this report is not the same Matt Palumbo who teaches mathematics at Delgado Community College.

At the same time, information from Sheriff’s Office records was added to the story to reflect that the drug and weapons charges against Matthew T. Palumbo were dropped in November 2011.