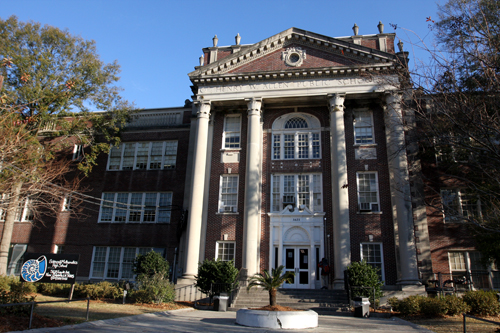 Most of the hundreds of attendees who turned out for a meeting on the future of Uptown school buildings wanted one of four things: renovations for Sophie B. Wright Charter School, a permanent commitment for Samuel J. Green Charter School, the reopening of the Mary Church Terrell campus in Gert Town or a new school in the Hoffman Triangle.

While Recovery School District officials declined to make any promises, they promised attendees that their nearly 50 comments would be strongly taken into account as they finished the school-building plan.

“I see the ‘I love Green’ T-shirts; I see the Sophie B. Wright T-shirts,” said Ramsey Green, RSD deputy superintendent for operations. “We’re getting that message very clearly.”

Even among an overflow crowd of 200 or more people, the three dozen or so supporters of Sophie B. Wright dominated the early part of the meeting with their passionate appeals for their building to be renovated. They love the building and want to stay in it, argued nine different speakers in a row, flanked by a host of other supporters in T-shirts proclaiming their allegiance. But the fifth phase of a six-phase master plan is too long to wait, they said.

“Every morning when I arrive at my desk, there are small drippings of rat droppings on my desk,” said athletic director Steve Williams, who says his office is in the basement and he finds ceiling tiles crumbled atop athletes’ uniforms. “I could stand here and cry to you right now.”

Teachers and students are wearing coats in the classroom against the cold, the speakers said, and “deserve water fountains that work and bathrooms that befit human dignity.” The school’s program and staff were praised but the building’s condition repeatedly denounced as “deplorable” and “unacceptable” by parents, board members and representatives from Touro synagogue who were there to “respectfully implore” the RSD staff to move renovations at the Napoleon Avenue campus from Phase 5 of the master plan up to Phase 2, which will commence next.

“We need science labs,” said high-school junior Deion Burke. “We need ceilings that do not cave in when you are trying to learn about Shakespeare.”

At the end of the meeting, Green called out Burke in particular as his favorite commenter of the night, and said the issue with rats Williams described is “totally unacceptable.”

“Sophie B. Wright made it all pretty clear,” Green said.

For the seven audience members that spoke on behalf of the Samuel J. Green Charter School, very little is wrong with that campus – except the uncertainty that seems to surround its future. The Green building is technically considered “landbanked but occupied,” meaning that the current program could be moved out and the building vacated at some later point, a notion that galls residents of the Freret neighborhood where it is located.

Dean Gancarz-Davies, president of Neighbors United and a teacher at Green, described the change in culture around the school because of the charter’s leadership. The school hosts adult soccer leagues at night behind the building, other neighbors noted, greatly contributing to safety on the streets at night.

“People did not feel safe walking by the school, but I’ve had several neighbors tell me now it’s not that case anymore,” Gancarz-Davies said. “I believe the community has thrived because Green came in. I do think it would really hurt the Freret and Milan neighbors not to have Green Charter School there.”

“Their whole block is an amazing garden,” Morse said. “To move it would be foolish. Why would you destroy something that’s just the model?”

The Green campus also had the support of Stacy Head, who did not attend the meeting but sent a letter outlining her thoughts on several facilities in her district. The first she mentioned was Green, calling the building viable and stating her opposition to any plan to move it.

“Why are we even asking this question whether Green should be open at its site? It’s a ridiculous question,” asked Andrew Amacker, vice president of Neighbors United. “The school is the heart of Freret. There’s no reason why we should keep coming to these meetings and defending Green, when Green should need no defense.”

Green, the RSD deputy superintendent, referred directly to Amacker’s question at the end of the meeting: “We’re going to be asking ourselves that question internally,” Green said.

At least 10 people spoke in favor of reopening the Mary Church Terrell campus in Gert Town, most suggesting it be used as a new campus for Lafayette Charter School with a partnership from nearby Xavier University.

Mickey Landry, director of Lafayette, said the school his school has a waiting list of 500 students, and that he would like for several grades to be housed in the Terrell building.

“The Gert Town community needs that building to be alive for the community,” Landry said. “By not opening Terrell, you’re condemning the Gert Town neighborhood to lower property values, more crime and more difficulties.”

Green replied that Terrell is campus the RSD has “recently heard a lot about,” and that the comments in support of it would be strongly considered. “Everybody from Gert Town, Roger that,” Green said. “We got it.”

Residents of Hoffman Triangle brought the RSD officials their own request: replace the Hoffman school that was torn down. Of the 10 or more speakers on the topic, several suggested an alliance with New Orleans College Prep as an operator.

Several residents noted the rapid population growth around the old school site. The Rev. Kenneth Thompson of the Hoffman Triangle Neighborhood Association noted that his neighborhood is named after the school, which now no longer exists.

Green also said the need for a new school there would be strongly considered, and noted that the district will take the new Census figures soon to be released into account.

Perhaps the only point of disagreement between speakers at the meeting was over the future of the former Allen school, which currently houses New Orleans Charter Science and Math High School on Loyola Avenue.

The first speaker to mention it was Kathy Riedlinger, CEO of Lusher Charter School. The school has been looking for a new campus to house the students currently taking classes at the Jewish Community Center, and Riedlinger simply said that “in the event the Allen building becomes vacant,” Lusher is interested. The Allen building backs up to Lusher’s campus on Freret Street.

Several speakers later, Barbara MacPhee, the founding principle of Sci High, was called upon. She said the school’s first choice was a new location in the “biomedical corridor,” but not on the LSU hospital site. She also said the school likes its current site, but noted her concern that Sci High does not appear on the master plan.

Finally, toward the end of the meeting, Carlos Zervigon addressed the RSD staff. The vice chair of the Audubon Charter School board, Zervigon said that Audubon has been requesting the Allen building as a replacement for its Carrollton campus since 2008.

“We have pressed our case to everyone we could think of we could possibly hear. When I saw that Lusher had asked for the building, I assumed that it was a misprint,” Zervigon said. “At the very least, I ask that your documents be corrected to reflect that Audubon has been requesting the Allen building for over two years.”

Green thanked Zervigon for the information he shared.

“We did have Allen going to Lusher,” Green said. “We’re going to keep an eye on that and make sure we’re not shortchanging anyone.”

Green also noted that the schools interested in Allen are all chartered through the Orleans Parish School Board, rather than the RSD, and that the final decision could likely come from them.