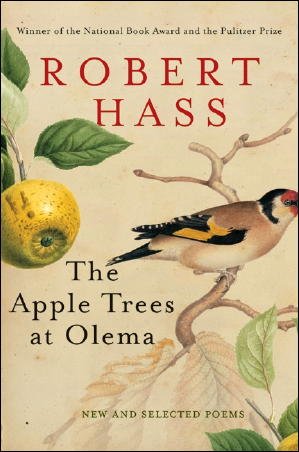 “You want to work right at the edge of what you know and understand.”

Addressing a packed Dixon Hall at Tulane University on Monday evening, former US Poet Laureate Robert Hass read from his work and offered reflections on a life in poetry as part of an ongoing series of events bringing noted writers and poets to Tulane’s campus.

Hass, who is a Professor of English at the University of California at Berkeley, is the author of six books of poetry, several collections of essays, and numerous translations of other poets’ work — such as the Polish émigré Czeslaw Milosz, with whom he was a collaborator until Milosz’ death in 2004. The event was sponsored by the Creative Writing Fund at Tulane, which has also sponsored readings by former Laureates Rita Dove, Louise Gluck, and Billy Collins.

During his reading, Hass read from a variety of different poetic forms and traditions, including haiku, a form native to ancient Japan which he said was composed of “amazing acts of attention.” Interspersing the poems themselves with his thoughts regarding them, Hass suggested he has always strived for immediacy in his work.

“Sometimes all you want to do with poems is catch a living moment,” he said. One of the purposes of poetry, he added, is “to try to wake us up to our being, to catch that lightning in a bottle.”

After reading a selection of shorter lyric poems and translations, Hass, who is a noted environmental activist, read a longer piece entitled “State of the Planet”, a poem written to commemorate the fiftieth anniversary of the Lamont-Doherty Earth Observatory in New York. He chose the poem for this reading partly, he said, in response to environmental damage in the region: from the damage incurred by Hurricane Katrina to what he called “the temporary destruction of the Gulf ecosystem due to the BP oil spill.”

In the poem, the speaker sees a young girl walking to school with a geography textbook in her backpack, and considers what this could mean:

The book will tell her that the earth this month
Has yawed a little distance from the sun,
And that the air, cooling, has begun to move,
As sensitive to temperature as skin is
To a lover’s touch. It will also tell her that the air–
It’s likely to say “the troposphere”– has trapped
Emissions from millions of cars, idling like mine
As she crosses, and is making a greenhouse
Of the atmosphere.

“Poetry should be able to comprehend the earth,” Hass said, on finishing the poem. “It must be able to say something of the earth beyond our human dramas.”

Hass’ poems range from the compact and spare to the expansive and free-ranging, with his work characterized as rich both in its detail and in its insight. His work addresses the deeply personal — Hass read an extended poem in three parts, entitled “August: A Notebook”, about the death of his younger brother – as well as the historical and philosophical, with a warmth in tone and a breadth of interest that has excited readers and critics alike. “We experience in his work,” said Peter Cooley, Professor of English at Tulane, introducing Hass, “that privilege of being, which he reminds us is our human gift.”

For his work both on the page and off – Hass is a noted educator and advocate for poetry – Hass has received nearly every major award in American letters, including the Yale Series of Younger Poets Prize for his first collection of poetry, Field Guide, a MacArthur Fellowship, the National Book Award, the National Book Critics Circle Award, the Pulitzer Prize, and the US Poet Laureateship from 1995-1997.

Asked about his writing process after the reading, Hass replied that it was “such a mess right now,” drawing laughs from the audience. But he said he makes a point of writing as a routine. “I’ve always had the theory that I would show the Muse that I was showing up for work,” he said. “One of the things I believe deeply about the process — and this is true for all writers, in all genres — is to keep at it.”

Pressed for more details on how he achieves the balance of ambiguity and declaration in his work, Hass said that he has always pursued an internal level of intuition. “Either you get ideas for what you want a poem to do or what you don’t want a poem to do — what’s important is how you negotiate that,” he said. Likening the process to painters selecting specific shades of colors over others, he acknowledged the difficulty in the process. “You’re feeling your way toward something you don’t know, but you know you’ll know it when you get there.”

The last question of the evening came from an undergraduate student, who asked Hass whether he recommended study or adventure for young, aspiring writers. “Adventure,” Hass immediately replied, drawing further laughs. But the auditorium quickly grew quiet again as he considered his reply.

“I think there’s a way of doing both,” he said, noting that for artists the process of creation and the pursuit of affective experience are rarely far apart. But the main element, Hass said, is to work. “In order to make art you have to be dedicated to it,” he said.

After a lengthy round of applause, however, Hass added one final thought. “I’d like to revise what I just said,” he said, smiling broadly.

“A lot of adventures happen when you’re sitting still in a chair.”

The above extract of poetry comes from Robert Hass’ The Apple Trees at Olema: New and Selected Poems, published by Ecco Press. For more information, contact Benjamin Morris at benjaminmorris@nolamessenger.com.

The book will tell her that the earth this month

Has yawed a little distance from the sun,

And that the air, cooling, has begun to move,

As sensitive to temperature as skin is

To a lover’s touch. It will also tell her that the air—

Emissions from from millions of cars, idling like mine

As she crosses, and is making a greenhouse