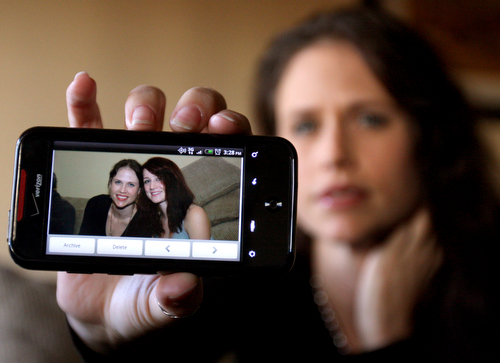 Rebecca Snook shows a photo on her phone of her and her daughter Melissa Martinez, 17, on Christmas in their Irish Channel home. Martinez perished in a fire two days later. (Sabree Hill, UptownMessenger.com)

With nighttime lows well beneath freezing last February, not too many people thought camping overnight in the St. Charles Avenue neutral ground was a great idea. 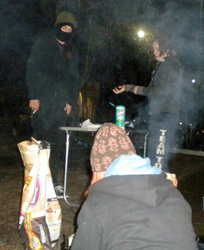 Kara Morgan, president of the Irish Channel Neighborhood Association, thought it was perfect. For Mardi Gras immediately after Saints’ triumphant first-ever Super Bowl victory, quarterback Drew Brees was riding in Bacchus, and Morgan needed to secure a conspicuous place on the route so he would see her life-size photo of him from his float.

But Morgan also needed fellow campers, and when most of her friends her age told her she was crazy, she turned to a dear friend and neighbor’s teenage daughter, Melissa Martinez, who “thought it was the coolest idea ever,” Morgan recalled. Along with Morgan’s niece and another neighbor, Martinez brought her boyfriend, and the five froze through the night together, huddling on top of tarps and around grills and space heaters in a makeshift camp near Seventh Street.

At 3 a.m., Martinez cooked burgers for everyone. At some point, a elderly Corgi wandered up lost, and the girls adopted him until his owner, a doctor who lived nearby, came and found him. By the time of the parade the next day, Martinez was so exhausted that she was home sleeping and missed it altogether. 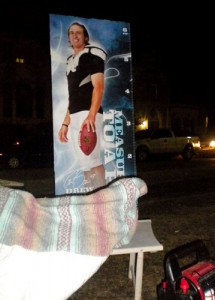 The entire point of that night for Martinez had simply been the experience and the camaraderie, Morgan now recalls, trying to understand how the beloved 17-year-old Irish Channel resident ended up among eight young people killed in a tragic 9th Ward warehouse fire two days after Christmas and labeled an outsider by the city she loved.

“I really just think she was there because she loved the outdoors, loved roughing it, and I really think that would explain a lot of why she would be in the building that night,” Morgan said. “To her, that would be something fun to do.”

Melissa and her two brothers had moved to New Orleans from the small town where they grew up just outside Santa Cruz, California, when their mother, Rebecca Snook, took a job at a software startup here in January 2007, Snook said in an interview at her Irish Channel home earlier this week. Snook and Martinez’s father had followed a joint-custody agreement for years, so when Snook first moved, Martinez split her time between the two coasts, remaining at her old school in Scotts Valley but living with Snook during vacations.

After her applications to several charter schools in New Orleans were turned down, Martinez finally opted to finish high school through an online curriculum and moved in with her mother full-time in mid-2009, Snook said. She was dedicated to the classes, and earned consistent straight A’s. Her mind was so filled with ambitions that for her 16th birthday, Snook baked her eight different cakes, one for each possible career path: veterinary medicine, marine biology, cosmetology, interior design.

Martinez was a constant helpful presence in the neighborhood, many recalled, walking dogs, running errands, babysitting, attending neighborhood gatherings and staying behind to help clean up. Keirsten Williams, a next-door neighbor when the family lived on Chippewa, said Martinez was always her first choice to babysit her children, now ages 1 and 2, sometimes all day while she was at work.

“She was just this really beautiful, humble, responsible person. I trusted her with my babies, and they loved her. We loved her,” Williams said. “Melissa was like the oldest 17-year-old I’ve ever met. All of [Snook’s] children have this really mature, responsible, ‘I’ve been here before, I know how to do it right this time’ aura about themselves.” 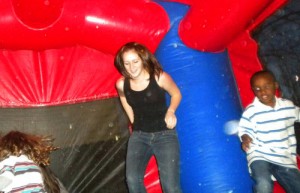 Her babysitting skills were widely called upon. Last year, during the Irish Channel St. Patrick’s Day party at a nearby bar, Morgan dropped her own toddler son off at Williams’ house with her two infants, where Martinez had agreed to watch all three. Word apparently got around that Martinez was keeping the kids, because by the end of the day she was watching six or eight neighborhood children.

“We would come in and check on them, and Melissa was just in there taking charge,” Morgan said. “She never batted an eyelash when someone came in and dropped another kid off. … Certainly, in this five block radius, Melissa was known very well.”

She had always dreamed of international travel, and had recently been given the opportunity to move to London with an aunt. But her adopted city of New Orleans had become home, her mother said, recalling a recent conversation about Martinez’s plans.

“She said, ‘You know, I don’t think I want to leave this city,’ ” Snook recalled. “That, actually, was really noteworthy, because for the last, oh, I don’t know how long, she’s been trying to figure out how to launch out into all the countries of the world.”

When Martinez turned 17, she finally got her first job, working at Mona’s Cafe on Frenchman Street in the Marigny. She had a shift the Sunday after Christmas, came home that night, and had another shift the following Monday. Snook drove her to work that morning, dropping her off at a nearby Walgreens in what would be the last time she ever saw her.

Snook and Martinez sent each other text messages constantly that day, just as they always did, until after the end of Martinez’s shift. She then told her mother that she would be joining a second-line parade in honor of a 27-year-old man killed Dec. 23 on St. Roch Avenue. Seeing that, expecting her daughter to be preoccupied, Snook said she stopped texting her. Martinez would send one more text to her mother that night, noting that it was cold and asking if she could stay with a friend, but Snook did not see it until the following morning.

Snook was surprised when she awoke to find her daughter not home, but figured merely that her cell battery had died. That afternoon, still with no word from Melissa, Snook called Mona’s. She was told Melissa had not shown up for her shift, and that this “was very uncharacteristic,” Snook said. She then contacted some of Melissa’s friends, who promised to find out exactly where she had gone.

Meanwhile, much of New Orleans woke up that Tuesday to news of a warehouse fire killing eight homeless “squatters.” Williams, Snook’s former neighbor, said she heard saw the story as well, but really didn’t imagine it could have any personal connection to her.

“We have so many tragedies in this city, it’s like “Oh, my God,” and then you’re on to the next story,” Williams recalled. “I don’t know anybody who hangs out in warehouses, so I read the headline, but then went back to my own life, consumed with my children.”

Meanwhile, Martinez’s friends were being told that she’d gone to the warehouse, but when they arrived late that afternoon to see if she was there, they found only a burned-out foundation where the building had been. They called Snook, told her they heard Martinez had been there but that the building was no more, and then Snook called police to report her daughter missing and possibly connected to the fire. 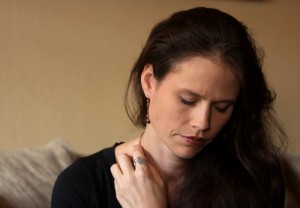 Rebecca Snook describes her pain at seeing her daughter described as a homeless California girl after the warehouse fire that killed her. (Sabree Hill, UptownMessenger.com)

The officer who arrived to take the report suggested she contact the coroner, but she could not get through to the their office. At 1 a.m. Wednesday, Snook posted to her Facebook account the following message: “Those of you who are awake, please send your positive energy this way. If ever I could use it, now would be the time.”

On Wednesday morning, the coroner’s office was told they weren’t taking any information about the victims – only dental records. She had those overnighted from her old dentist in California, and on Thursday she learned conclusively that her teenage daughter, her Melissa, was not coming home.

“Why something like this is so tragic is that she wasn’t doing anything wrong. She was just spending time with her friends,” Snook said. “I find peace in knowing that she was happy.”

‘The place that she loved’

When Martinez’s name was released later that day as a victim in the fire, she was widely listed as being from California, another out-of-stater among the homeless or “traveling” kids who hung out in the warehouse. Those reports spread quickly, and Snook said she was beset by calls asking how her daughter had become homeless. Her daughter likely enjoyed the company of the people she died with, she said, but she did not share their lifestyle.

“I never feared that she would hop on a train,” Snook said. “That never even crossed my mind. Her goals were very solid, very clear.”

The loss of the daughter, she said, began to compound with the improper perceptions robbing her of her motherhood. Those hours and hours she spent talking to Melissa, discussing her philosophies and her life goals, all those text messages – all of a sudden, those no longer seemed to count.

“It didn’t put much focus on the fact that she really has a strong foundation here,” Snook said. “She was part of a tight community. This place was the place that she loved.”

“I don’t feel like there’s enough attention to, this is a local,” said Williams, for whom she babysat. “She touched so many people. I feel for the other families. A big deal needs to be made out of all of it, but here is a young woman grieving the loss of her child. This is like two weeks later, and the headlines are still about the out of towners. What about this local family that’s suffering?”

After Martinez’s death, Morgan and other friends quickly organized a benefit for her burial expenses at the Rendon Inn, set for 8 p.m. tonight.

“I don’t mean this to insult the other people, but she is in fact not a squatter,” said Morgan, the neighborhood association president. “She had a home. She happened to be hanging out with them that night, but she’s from the Irish Channel, and she was well loved.” 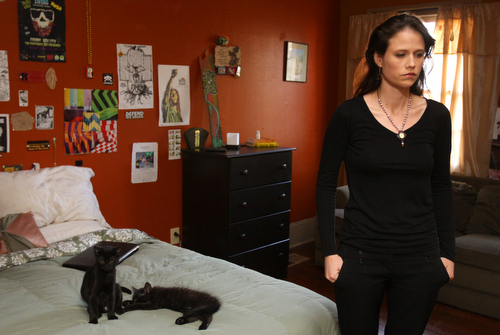 Photos by Sabree Hill; article by Robert Morris. Contact us at sabreehill@NolaMessenger.com and rmorris@NolaMessenger.com, or post your comment below. Note: Because of the sensitive and personal nature of this article, comments will be moderated more closely than usual. Please be respectful.