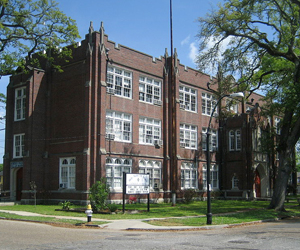 The Holy Name of Mary campus in Algiers (Photo by Infrogmation of New Orleans, via Wikimedia Commons)

The International School of Louisiana stepped forward Wednesday on its expansion to the Holy Name of Mary campus in Algiers, authorizing a potential lease agreement that allow the workers to begin in February preparing for the next school year.

The campus, located at 502 Olivier St., has been closed for 18 months but is still owned by the Archdiocese of New Orleans. Based on the discussions thus far, the ISL board gave Head of School Sean Wilson permission to sign a lease once negotiations have finished.

“It has not been settled. The whole lease is still out there,” Wilson said after the meeting. “There are some things we believe we can easily come to terms on, once we get a full idea of what the facilities issues are.”

Wilson has already had what he called a “cursory” review of the Holy Name of Mary site, and said much of the work needed is merely cosmetic, like painting. ISL’s service personnel are conducting a more thorough review, and their report should be finished by the end of the week, but given the building’s relatively brief vacancy Wilson said he is not expecting major issues to arise.

The ISL board only made two requirements for the lease, that it be for at least five years starting Feb. 2 and that the price not exceed $5 per square foot. Wilson said that the price remains under negotiation as well, but that the board’s parameters were realistic.

Earlier this month, Wilson met with the Algiers Point Neighborhood Association about the campus. He described the reaction of the approximately 70 attendees as a mix of excitement and cautious optimism, and noted that the move to the site has earned the support of the association president and the area’s City Council member, Kristen Gisleson Palmer.

“Overwhelmingly there was support for our school being in the community,” Wilson said. “It was really a warm reception. In terms of what it is we’re attempting to do, to increase opportunities for families on the West Bank, this is a great opportunity for those families.”

The school’s total enrollment in kindergarten through eighth grades currently stands near 550 students. Projections for growth at both campuses call for a total enrollment just short of 1,000 in five years, which would require an amendment to the current charter’s cap of 618 students.

The board’s nominating committee offered the name of New Orleans attorney David Napoleon to join the ISL board. Napoleon, a 1997 graduate of the Loyola University School of Law and member of the Warren Easton Charter High School board, has already interviewed with the nominating commitee and agreed to serve if selected, said committee chair Karen Dwyer. Napoleon would be the only attorney on the school board, she noted.

The school’s annual “Refrigerator Art Gala,” a fundraiser for its arts programs at The Foundry, will be April 3. The school has not yet secured its corporate sponsors for the gala, so ISL board chair Grant Ligon said board members would assist in recruiting major supporters.