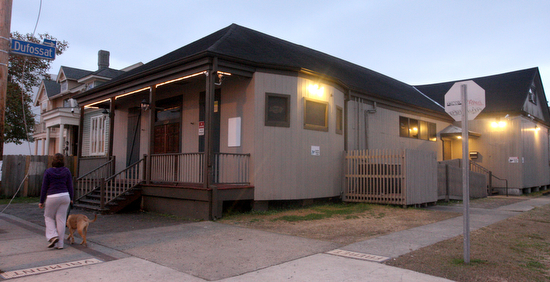 A woman walks past Friar Tuck's bar Tuesday evening. The bar will not reopen after last night's shooting death of a patron in the street outside it, according to the owner owner Jason Blitch. (Sabree Hill, UptownMessenger.com)

Friar Tuck’s bar will not reopen after last night’s shooting death of a patron in the street outside it, its owner said in an interview Tuesday.

“I cannot expect myself or any other employee to go to work when a gentlemen was shot and killed 15 feet in front of my establishment,” Friar Tucks owner Jason Blitch said, noting that the victim, identified by police Tuesday as 19-year-old Errol Meeks, was a friendly acquaintance of his and his employees. “This is not a memory or a view that any of these people should be having to deal with again. … I don’t think anyone should have to come there and relive what happened last night.” 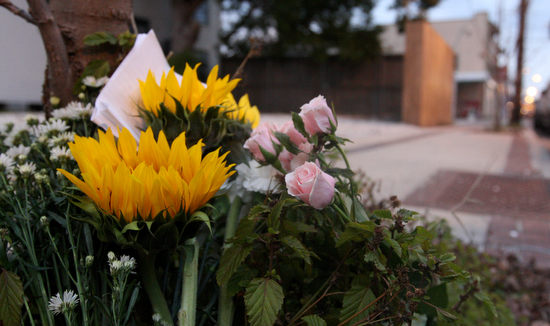 After the city alcohol board ordered Friar Tuck’s closed for 30 days because of a citation for serving to minors, Blitch said he received the official notice to close Jan. 10, and that said it went into effect 30 days afterward. Thus, he was planning to close Feb. 10, he said.

Blitch said he has received supportive phone calls from other Freret Street businesses, but he feels that majority opinion on the street desires for him to close. Friar Tucks, however, is only the scapegoat for a larger crime problem on Freret Street, he said.

“Don’t kid yourself that by closing a business on Freret Street, crime in the neighborhood is going to go away,” Blitch said. “Open me, close me, burn me down, put me in the trash and dig me up again. The guy who shot this person doesn’t care if I’m open or closed.”

Blitch explained his decision more fully in a series of emails to the Freret business community, printed in full below.

The person who was shot and killed last night was not a lawless individual. He was a friendly neighborhood gentleman.

I agree this type of publicity is negative for everyone involved. The actions that occurred last night can not be blamed on anyone except the person who pulled the trigger. We have viewed the films with law personnel and can not identify the shooter since he has never been in or at the establishment before. I have taken it upon myself to close Friar Tucks. I believe this is the best action to be taken. Please understand i have never intentionally broken the law or have I intentionally done anything to harm this neighborhood. Friar Tucks Bar is ceasing operations immediately due to the fact that we can no longer operate successfully. I would also like to say that the individual that was shot was a very good person. He would come by and play pool. He never started any trouble and just drink pineapple juice and played pool. His actions were not unlawful. He never acted in any manner for us to believe otherwise. Someone called him on his phone to come outside and shot him. It is a sad loss. The troublemakers and the shooter live in and grew up in the neighborhood. Immediately after last nights shooting a car involved was found on Carondelet street where another shooting occurred. This situation disgusts me more than you will ever imagine. I have a female employee who stayed outside holding the victims head until ems arrived. These are all reasons I have decided to close. Changing the image and reputation of Freret St. goes further than what any business can do. The neighborhood as a whole needs to be changed. I will again apologize for any and all problems that fellow business owners believe I have caused to Freret St.

Blitch continues, in his second letter:

I have nothing to go gain passing blame or pointing the finger. I grew up on Worth Pl. and caught the school bus in front of Fortier High School for 12 years. I am a part of this neighborhood with or without a business. I can with time replace all financial and material losses. What i can not replace are the photos in my head of a young man who was gunned down. It always effects you more when a situation like this occurs in your own backyard. When we hear of violence in other districts it makes you shout at crime and the bad publicity the city gets. When it happens in your own neighborhood it makes you question why are we living here. These senseless acts seem to be a part of this neighborhood, that for a long time, we accepted as part of our lives. The neighborhood needs to change as a whole. It cant be done by one person or a small group of active individuals. We can not look at each other and blame ourselves for what is going on. We have all had run ins and dealings with the individuals in question because they live in the neighborhood. How do you chase someone out of their own home? How do you tell someone to go when they are already there? In numbers all problems can be taken care of. Worrying about what color a house is being painted or who is renting this place or that place does not matter as much as WHO GOT SHOT. Crime is the biggest problem we have in this neighborhood. Sometimes it seems like its getting better then a situation like this occurs and it makes you question how good or bad things are. When the owner of the Po-Boy Shop had a knife pulled on him everyone said “the guy who did it has mental problems”. Some people were almost making it seem OK that he was held up with a knife. Accepting these things can not happen. I had an investor come by the bar on Monday to look into helping me completely change and overhaul the business. She said she drove around for an hour before meeting me looking at the neighborhood. Her first comment was Freret St. looks great but what about the neighborhood. Her concerns were not income based but crime based. These murders and acts of violence stretch from Napoleon all the way to Jefferson. There is no one person causing these acts. I have been robbed at the location three times. Once with a gun to my head. Realizing that not one person is responsible should be the clue to focusing on the neighborhood as a whole. I have, since last night, gotten threats form friends of friends of the incident. Threats for what i give to police and what camera views outside I show. I have given NOPD every second of every tape I have. Yes, I am closed but I am still part of this neighborhood and will be here…