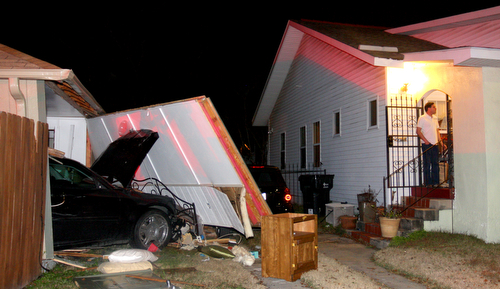 A car crashed through the side of a house on Cadiz and S. Claiborne Thursday night. (Sabree Hill, UptownMessenger.com)

A car plowed through two walls of a home near the intersection of Cadiz and Claiborne around 9:30 p.m. Thursday, sending the driver to the hospital but without injuring anyone else, witnesses said.

Mike Zeininger, 30, said he was standing on his porch about three doors up from Claiborne Avenue when he heard the sound of a car peeling out. He looked toward Claiborne and saw the car begin over the sidewalk and head diagonally across the parking lot, picking up speed, and thought it was taking some sort of bizarre shortcut onto Cadiz, he said.

Instead, the car continued across Cadiz and directly for his neighbor’s house, a small, one-bedroom home in the backyard of a larger two-story apartment house that fronts on Claiborne, Zeininger said. The car smashed through a wooden fence, narrowly missing a tenant’s red Ford Focus in the rear driveway, crashed through the front wall of the small house and burst through a side wall before coming to a stop.

Several neighbors rushed to the driver’s aid, banging on the windows in an effort to stir him and get him out of the smoking vehicle. Matt Tyson, a 24-year-old college student, finally smashed in a rear window with his arm, reached inside, unlocked and opened the door and then turned the engine off, several witnesses said.

“I just rolled up my sleeve and threw my elbow into it,” Tyson said.

The driver seemed conscious but “out of it,” with his eyes open but not speaking or really interacting, the neighbors said. He was quickly taken away by paramedics as firefighters and police arrived and residents began assessing the damage.

The occupant of the small cottage destroyed in the crash was not at home, and none of the people nearby were injured, the witnesses said.

“It was miraculous,” Zeininger said. “It was good timing – if that was going to happen.” 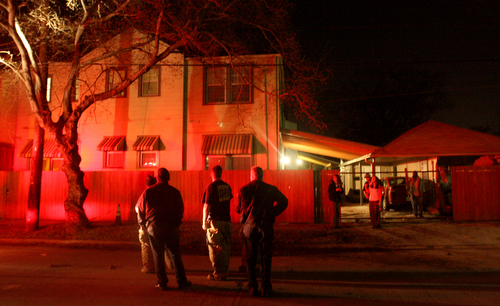