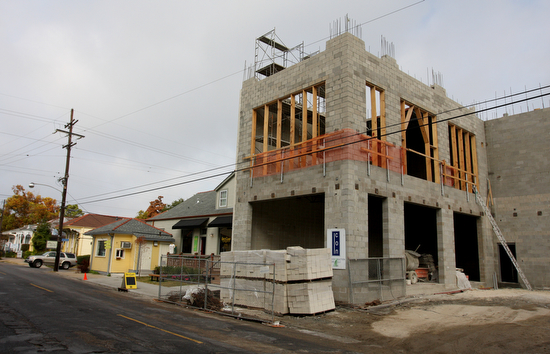 Romney Pilates, currently located on Magazine near Amelia, is planning to move farther uptown to a new site across from the Whole Foods supermarket. Construction has already begun, but the design of the new building has drawn the interest of several neighborhood groups.

The announcement of a meeting about the Romney project originally set for today set off a flurry of email alerts and conversations Wednesday among members of the Audubon-Riverside, Hurstville and Upper Hurstville neighborhood associations, which together represent most of the households Jefferson Avenue and Audubon Park, from St. Charles Avenue to the river. The meeting was also scheduled to include representatives of City Councilwoman Susan Guidry’s and state Rep. Neil Abramson’s offices, according to the notice.

Tonight’s meeting, however, has been postponed likely until next week, because work has been halted on the building, said Kristine Froeba, one of the meeting’s organizers.

The city issued a stop-work order on the project “due to an issue with the number of parking spaces,” said Deborah Langhoff, Guidry’s chief of staff.

The Romney project has received considerable support in the past. Gambit lauded its current location’s design when Romney won “Best Place to Take a Pilates Class” in 2009’s “Best of New Orleans.” “The updated design is striking: recycled resin wall panels, cork flooring, a bamboo-garden lounge and a bevy of the latest Pilates and exercise equipment,” Gambit wrote.

The studio’s application for a reduction of city parking requirements in August 2009 also included letters of support from several nearby retailers and many of the studio’s clients, including Drew and Brittany Brees.

“As Uptown residents we feel they embody all of what our beloved city is and should be,” the couple wrote. “Romney Studio understands the importance of rebuilding in New Orleans while keeping the integrity and charm of the Uptown area.”