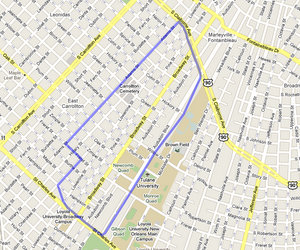 Children who live in a small Carrollton neighborhood will still get automatic admission to Lusher Charter School next year, but only if they enter as kindergartners, based on a policy the board voted Saturday to extend to the 2011-2012 school year. Exactly much how longer that option will exist, however, remains uncertain.

“For this year, what we’re going to do is accept in-district neighborhood students in kindergarten,” said Lusher CEO Kathy Riedlinger. “Beyond kindergarten, there’s no guarantee.”

About a third of the incoming kindergarten students each year have received automatic admission to Lusher because they live in a neighborhood that runs roughly between St. Charles Avenue and Claiborne, between Audubon Boulevard and Adams Street. Older students who move into the neighborhood may still apply to attend Lusher, Riedlinger said, but their applications will be evaluated “on an equal basis” with those from elsewhere in the city.

The rationale for the policy is partly based on the desire to serve the family of the neighborhood where Lusher’s elementary campus sits, not to make that neighborhood a destination for parents seeking an easy transfer into Lusher, Riedlinger explained during Saturday morning’s meeting of the Advocates for Arts-Based Education board, which governs the school. Further, only a few seats open each year in the grades above kindergarten, and those slots would quickly be filled if automatically allocated to students moving into the neighborhood.

“It’s how we’ve had to do it,” Riedlinger said. “People are under the misconception that if you move into the district in March, you get in.”

Even that limited admissions policy for the neighborhood is not a certainty, however. As the New Orleans public-education system continues to recover from the devastation after Hurricane Katrina, Riedlinger said the role of charter schools is continuing to evolve.

“A lot depends on how this plays out,” Riedlinger said. “I may be coming back and saying we may have to take a look at dropping the neighborhood completely.”

Very few schools in New Orleans are neighborhood-based, but Riedlinger said she’s heard that each charter school may be assigned a neighborhood in the future, which might alleviate some pressure on Lusher.

“You can’t be the only school in the city to have a neighborhood without there being abuse,” Riedlinger said.

Riedlinger’s comments elicited little response from the board Saturday morning, other than board member Paul Barron’s suggestion to have the admissions policy for next year ratified by a vote of the board. That motion passed unanimously.