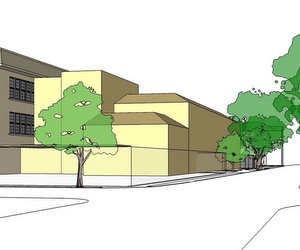 An architect's rendering of the Pine Street view of the rear of the Audubon Charter School expansion. The yellow portions represent the size of the additions (without architectural features included yet); the gray portion is the existing building. The expansion will be completely contained behind the current building and not visible from Broadway.

Audubon Charter School parents, teachers and neighbors literally applauded a new design for the expansion of the school’s Broadway campus on Wednesday night, but as more details began to emerge, so did more vocal concerns about traffic flow around the school as children come and go.

Ultimately, the streets on either side of the school may need to be made one-way, said one neighborhood leader.

The school is in the early stages of planning a two-year renovation of the Broadway campus that will dramatically reconfigure the interior and add 10,000 feet of new space onto the current historic structure. The FEMA-funded expansion will not add more students to the high-performing Montessori and French-immersion programs, however; it will simply give the current student population larger classrooms and more amenities required by state standards.

Exactly how those new rooms will be configured has been the subject of a series of community meetings at the school this fall. At the last meeting, in October, attendees saw two different possible arrangements — a one-story addition that would wrap around the rear of the campus and extend to a rear corner, or a two-story addition that would be contained behind the current structure.

Each of those designs had drawbacks, however. The two-story addition was generally praised as being more compact and attractive, but fears that it would not provide enough ground-floor classrooms for kindergartners (who are not allowed to attend class upstairs) led the parents and teachers to prefer the more sprawling one-story version by a 15-10 vote in October. That “wasn’t a strong enough consensus,” said Jules Lagarde, design manager for Jacobs/CSRS, the engineering and architecture partnership managing the renovation, so he went back to the drawing board and returned Wednesday with a new, third proposal. 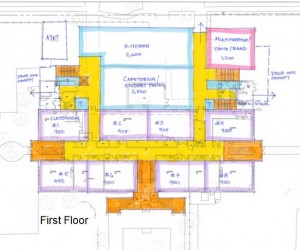 A consultant's sketch of the possible floorplan for the expanded Audubon Charter School Broadway campus. A new cafeteria and kitchen take up most of the first floor of the expansion; classrooms 2 and 3 are located where the school's cafeteria presently sits.

In it, the entire expansion would be contained in a multi-story addition behind the current structure. On the first floor, the existing cafeteria would be renovated into classrooms, creating enough new space with existing classrooms for the eight properly-sized kindergarten classrooms the school needs. The cafeteria and kitchen, then, would become the primary components of the first floor of the expansion.

Lagarde suggested substituting this new concept instead of the two previous ideas, then asked if it would be acceptable. “How much heartburn does this change cause you?” Lagarde asked – and many of the 30 or so people in the room broke into applause.

Very few tweaks were suggested to the plan Lagarde proposed. Teachers in the audience were concerned that two of the new ground-floor classrooms have no windows, and Lagarde admitted that this was one of the plan’s primary shortcomings. Others raised questions about the proximity of restrooms to the kindergarten classes, a problem Lagarde said he would do his best to alleviate.

With the design of the building now on its way, neighbors to the school became more interested in how the site layout can reduce traffic congestion around the beginning and end of each school day. The school currently has entrances on three of its four sides – on Hurst, Pine and Garfield streets – and Lagarde said he is beginning to explore some sort of driveway in the front, on Broadway, that could speed the process without using too much of the site’s green space.

John Lafargue, president of the Upper Audubon Neighborhood Association just across Broadway, said the congestion comes from overuse of the campus by Audubon’s two separate instructional programs. He pointed at student populations that neared 600 in years past (compared to this year’s number of just under 400), and said the school should provide a written document after the expansion promising not to exceed a set number of students.

“We’re not critical of the programs that are run here, but as a neighbor we have to gauge the detrimental impact of a 10,000-square-foot addition,” Lafargue said. “When you have an administration that’s willing to go beyond what the fire marshal requires because of the demand for the excellent programs here, how as a neighbor am I protected?”

Part of the traffic problem is based in the desire of so many Audubon parents to park their cars and take their children all the way to class themselves, said Dewayne Wilson, a neighbor of the school. “I’ve never seen a school where so many parents park and walk their students into school every single day,” Wilson said, a sentiment echoed by several neighbors in the room.

Many of those parents have children in pre-kindergarten classes, and are uncomfortable letting their 3-year-olds walk in on their own, school officials replied. Audubon parent Charles Mendy said during the meeting that he would never have allowed his children to walk in themselves at that age. Afterward, Mendy added that the brief time he spends each day with his children’s teachers and other parents keeps him fully involved in their education.

“You don’t imagine the joy you can take out of walking your kids to school,” Mendy said. “This is our time. These are the simple things that your kids never forget. We cannot put a price on that.”

Reconfiguring the streets may provide some relief, said Patrick Tucker, new president of the Uptown Triangle Neighborhood Association, where the school officially sits. One idea under consideration is making Hurst and Garfield each one-way between Broadway and Lowerline to impose some order on student-dropoff traffic, and restricting parking around the perimeter of the school to better distribute those parents who prefer to park into the neighborhood, rather than right around the campus.

“I think there’s a give and take in every solution,” Tucker said.

Any changes to traffic flow will be discussed at the next meetings, Lagarde said, though no date has yet been announced.

Renovation work will begin after the end of this school year, and the building must be vacated by mid-summer so construction can begin. The Orleans Parish School Board is still working to determine where the displaced Audubon students will attend classes during the two-year renovation, Lagarde said.

One thought on “Expansion of Audubon Charter begins to take shape”