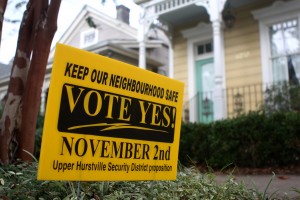 A home at the corner of Magazine and Henry Clay shows support for the neighborhood's security patrols, up for renewal on Tuesday's ballot.

If voters in Upper Hurstville choose to renew the neighborhood’s private security patrols Tuesday, they’ll see a reduced fee on their property-tax bills next year.

The fee had been $485 per parcel, but the security district’s board voted last week to reduce that amount to $425, said district chair Karen Duncan. The legislation enabling the 24-hour patrols expires after this year, however, so Upper Hurstville residents must first renew the district at the ballot Tuesday.

“If the proposition doesn’t pass, of course, there’ll be no security fee and no security patrols,” Duncan said.

The district had increased the fee to $485 to cover the increased costs of hiring private security after Hurricane Katrina, Duncan said. Those prices have stabilized, and Upper Hurstville then partnered with the neighboring Audubon Area Security District to share some patrols on quiet shifts, reducing costs to both districts.

“That worked out well,” Duncan said. “It didn’t create any increases in crime.”

Renewing the patrols had originally been slated for the Oct. 2 election, but the wording of the question that the city sent to the state would have raised the fee to $650, so that proposition was scrapped. The correct legal language reauthorizing the district sets a cap on the fee at $650, but the board actually sets each year’s amount and chose $425 for next year, Duncan said.

Tuesday’s ballot will also feature 11 other neighborhood security and improvement districts around the city, according to the Secretary of State’s office.